To Learn the Ocean is to Love the Ocean

With Ecological Marine Adventures camps and classes, Taylor and Amber Maready provide fun outdoor experiences while instilling a sense of environmental hope in the next generation.

If all of the trees on planet Earth were cut down today, the ocean would generate enough oxygen for us. It’s estimated that up to 85% of the oxygen on Earth is generated by phytoplankton from Mother Ocean. Taylor Maready tells me this while crossing the beach near the Surf City Ocean Pier to check in on a group of Aquarium Apprentices, one of several week-long camps offered by Ecological Marine Adventures (EMA).

At the water’s edge, a group of campers bends over a seine of wriggling ocean creatures as the instructor holds up a tiny fish, a mullet, that flips and flops to their amusement. The questions fly as students begin their field work. During the week at camp, they learn tank and water care, data collection, preparing and feeding animals, and animal care and handling.

Maready and his wife, Amber, owners of the ocean conservation business for five years, follow this philosophy: “Teach people to love the ocean, because if they love it, they will take care of it.” 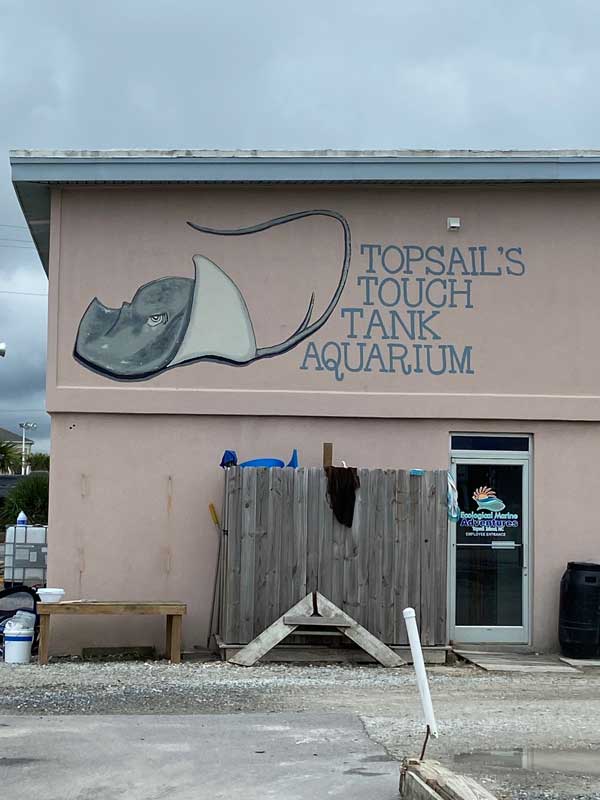 Based in Surf City, EMA offers camps for all ages, scuba camp, classes, parents’ nights out, birthday parties, school field trips, guided ghost crab hunts and more. In addition to camps and classes, EMA has an education center with a small touch tank aquarium with a stingray and urchins and a reptile room. In summer they may see 100 visitors a day, with another 75 students in camps and classes on any given day, Maready says.

“Our camps, classes and everything we do at EMA teaches ocean conservation and the importance of the individual,” Maready says. “Our message is of hope and a bright future. Yes, we have a lot of cleaning to better our ocean, but we fully, 100% believe that we, as incredible human beings, can make that happen.”

A Hampstead native and avid surfer, Maready joined his good friend Kathleen Murphy a decade ago when she started with a tent on the beach at Topsail Beach to teach kids about the ocean.

“I came on board to help her with the surfing portion of a Surf and Science class and fell in love with her program,” Maready says. “Fast forward, and Kathleen decided to move in a different direction and sold EMA to the Town of Surf City. Around that time, my wife and I were expecting our first kid and moved back from our travels in Nicaragua. I got a call asking if I wanted to run EMA. About a year later, we had visions and ideas of what could happen with EMA, made an offer to purchase it from the town and have been working our dream job ever since.”

Maready saw a bit of the world before returning to Topsail Island.

“I started traveling around at 18 years old,” he says. “I ran eco-tourism businesses, surf camps and even fancy hotels. Everything I did revolved around the ocean. I’ve tagged sharks with scientific research companies, scuba dived in incredible places and surfed oceans all over the world. I was eventually able to get some education from Cape Fear Community College with their Marine Technology program, which I highly recommend.” 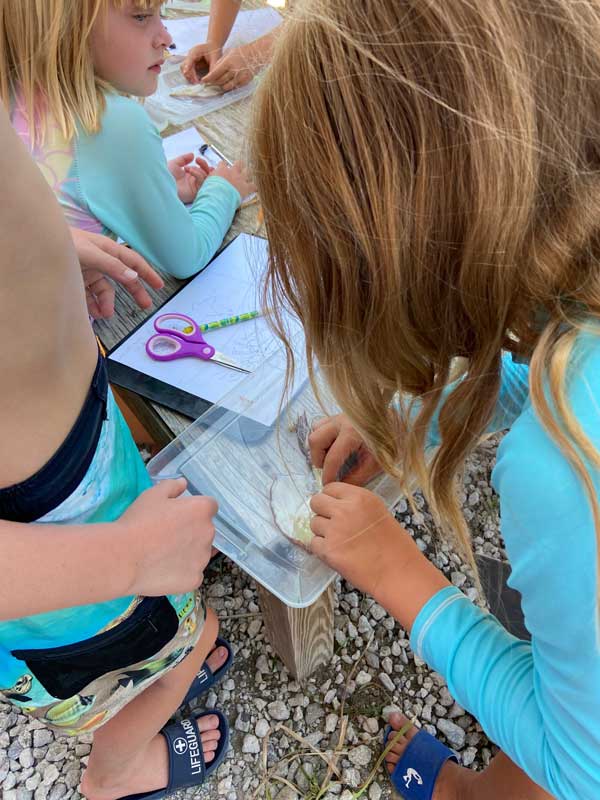 The Mareadys previously had an ecotourism standup paddleboarding company and a yoga mat protector company and now they own Ecological Marine Adventures and North Shore Juice with the Pasquantonio brothers and run a nonprofit called Tides of Hope.

North Shore Juice is a juice bar/smoothie shop in Surf City that shares a similar vision with EMA while offering healthy and delicious treats and making the smallest footprint possible on the environment.

Maready loves the career and the lifestyle he and Amber have created for themselves.

“I have done and seen some incredible things and met incredible people, all while sharing these experiences with my closest friend, my wife,” he says. “Don’t get me wrong, it’s a lot of work! We have two little boys, Indy and Vai, ages 3 and 5, and they love the adventure just as much as we do. There are some days where we get to work around 7:30 am and when we leave at seven that night, the boys are crying to stay at EMA. They did that last night. They love it. I love that they love it.”

The Mareadys business is much like Topsail Island, small in the winter with one full-time employee and much bigger in the summer with interns and instructors, most of whom are college students majoring in environmental science, biology or marine science.

“We have some students that started coming to camp when they were four or five years old and now, they are working for us,” he says. “That’s amazing to us. This company is nothing without our incredible community and our beloved return students.”

Isabella Cogan, 17, was a camper then a volunteer, and this summer she is an assistant camp counselor and aquarium tour guide. She answers campers’ questions to expand what they are learning and she teaches visitors how to interact with the animals and specimens in the touch tank while sharing fun facts and answering questions. 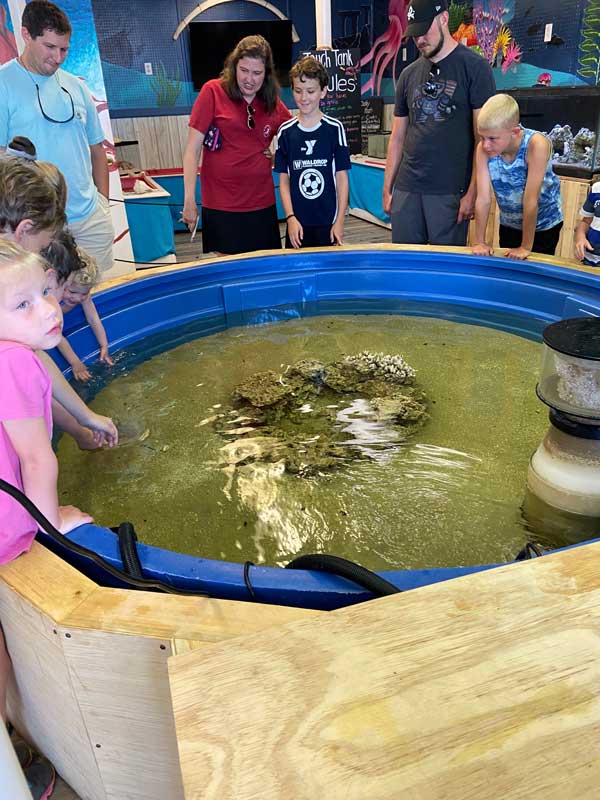 “Both jobs are super fun,” Cogan says. “What I love most is how engaging, informative and fun it is. It’s heartwarming to see a camper become comfortable around an animal they were once afraid of, catch their first fish or find their first shark tooth. It’s satisfying to see kids become inspirited to take action in their community and to be compassionate about nature.”

Cogan adds, “My co-workers are extremely kind and compassionate, too. They embody the goals – to learn, love and protect. I feel lucky to be a part of the Ecological Marine Adventures family.”

A military family, the Cogans moved to Surf City from California. Cogan’s mother, Theresa, loves that her kids have hands-on experiences and fun learning about the environment. The Cogan family boys were at EMA this summer, Tommy, 13, as a volunteer, and Cael, 9, a camper.

“The boys never got tired of camp and were always surprised to see me at the end of the day,” Theresa says. “Our family has created lots of special memories through EMA programs. I’m thankful we have a program like that on the island.”

“First, I hope they leave with a greater love of the ocean,” Maready says. “One of my favorite experiences was a time where we were at the beach and lining up to come back to the lab. We line up so that we can stay together as a group. One of the kids took off running down the beach. I thought to myself ‘Where in the world is, she going?’ Just as I was taking off to go catch her, she stopped, grabbed a piece of trash out of the sand, then came back in line. That’s when it hit me. What we teach is really making a difference. People want to help; I just think they need to be reminded that they can do it.

“Probably the most important thing that we want our students to leave with is a sense of hope and belief in themselves.

People are amazing. We are capable of incredible things. If we want to change the world, then we can do it! You have to believe in yourself … that you can make a difference. I hope everyone that steps in our building feels their importance and their greatness. I hope they leave and say to themselves, “I am amazing, and I can make a difference in this world.”

Want to learn more?
To explore camps and classes with Ecological Marine Adventures, go to ecologicalmarineadventures.com. The education center is a 106 N. Topsail Drive in Surf City. Call (910) 515-9751 for information.
North Shore Juice is at 204 Roland Avenue in Surf City. Go to northshorejuice.com to learn more.