Pumpkins for a Purpose

Surf City Rotary is thrilled to be able to hold its second annual Surf City Rotary Pumpkin Patch this year. Featuring a wide variety of organically grown pumpkins, the event supports a long list of local organizations. It will be held from October 17 to 31 at Treasure Coast Landing on the mainland.

The inaugural fundraiser held in October 2019 was a tremendous success, and the Rotary Club was able to donate proceeds to many organizations, including some hurricane relief efforts. For this year’s pumpkin patch, funding recipients will include:
• College scholarship for a Topsail High School senior
• Backpack Program for Hungry Children and Project M.U.N.C.H.
• Catherine’s Closet and Roots of Recovery
• Share the Table
• Boys & Girls Homes of NC at Lake Waccamaw
• Reel Housewives of Surf City
• Paddle 4 the Troops
• Operation Military Kids Club 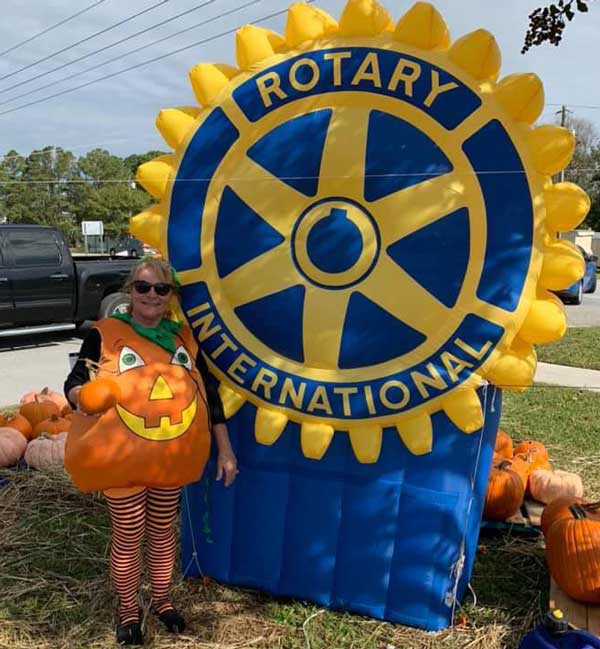 Debra Sasser, fundraising chair for Surf City Rotary, says the event “went off like a charm last year.” Even with the COVID-19 pandemic affecting many organized events in 2020, Surf City Rotary Pumpkin Patch will be an outdoor event following all COVID-19 protocol. The patch is in an open field between the Greater Topsail Area Chamber of Commerce and Shipwreck Point Golf.

Surf City Rotary Club is newly chartered as of 2019. Previously, the club was part of Coastal Pender Rotary Club, and the two organizations still partner on occasion. The Coastal Pender group will join the Surf City club this year in their pumpkin patch venture. In addition to hosting the pumpkin patch, Surf City Rotary Club also helps to clean up the beach access at Greensboro Road among other area projects, staying true to their motto of “Service Above Self.”

There is a “good core of 10-15 workers who are dedicated to the event,” Sasser says. In addition, the group gets help from local Boy Scout Troop 777, whose members assist in unloading pumpkins from the truck and setting up the field. Pumpkins will be arriving the morning of Saturday, October 17 from a reservation in New Mexico. They will be set up on pallets throughout the field to keep them from sitting directly on the ground.

The Surf City Rotary Pumpkin Patch will also include a photo op area that was incredibly popular at last year’s event. Families can get a seasonal photo featuring a backdrop of bales of hay, pumpkins, and mums. This year, the mums will also be offered for sale, in response to the many requests the club received last year to be able to purchase the decorative plants.

Since last year was their first with this type of event, Sasser adds that they have learned quite a bit in the process. For one, she says, they now know that you “don’t grab pumpkins by the stem. If you do, you will see a circle at the top days later where they’ve been weakened.”

Sasser emphasizes that there is a wide variety of pumpkins available at this year’s event and that all of the pumpkins are organic, which “tend to be healthier, stronger pumpkins.” She adds, “These are not cooking pumpkins,” which are usually pale orange.

To add to the money the club is raising this year, they will also be selling sponsorships on yard sign sized placards. The club is focused on ensuring that the pumpkin patch benefits others in the community. Any broken or rotten pumpkins will be provided to area farmers, for a donation, on November 1. In addition, they will give some of the leftover “good” pumpkins to Share the Table, a food pantry in Surf City.

Sasser says that the event is a lot of work, but “it’s fun. We really enjoy doing it.” And the group, under the leadership of President Elizabeth Hawthorne, is anticipating it will be bigger and better this year. 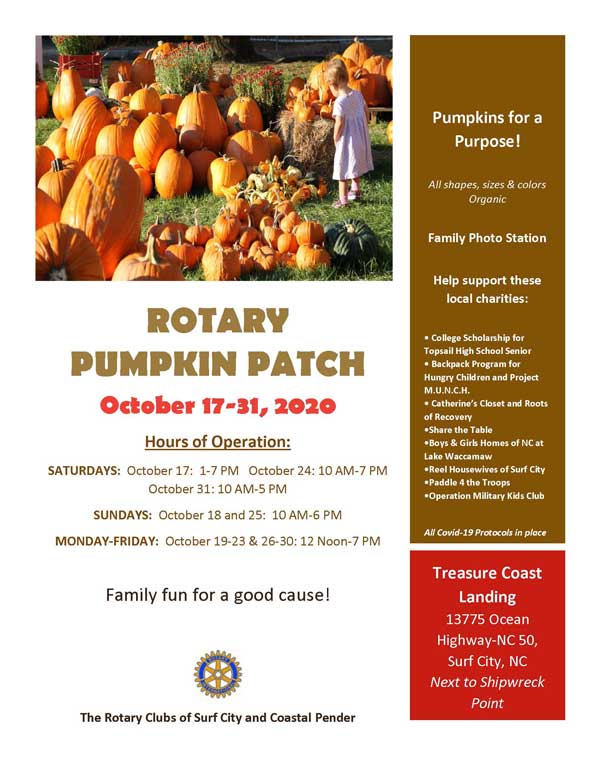