Mike’s Farm in Beulaville carries on Lowe family farm traditions and welcomes visitors for a variety of activities and tasty fried chicken, which is always on the menu.

On the farm in eastern North Carolina, Lucille Lowe always prepared a barn day dinner for her family and for everyone who helped bring in the crop. That barn day dinner was always fried chicken, ham, biscuits and vegetables grown on the farm. 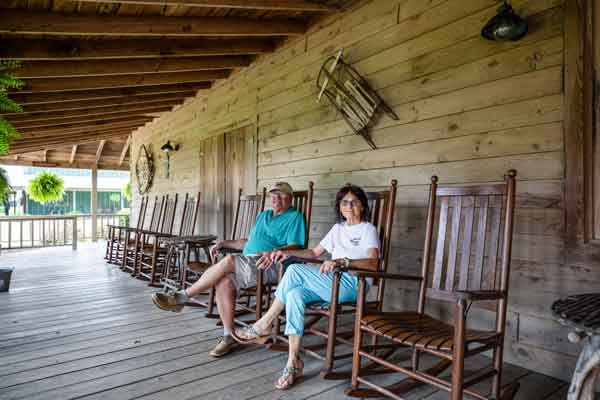 Today, barn day dinner is served every day on Mike’s Farm. Mike Lowe is Lucille and Jess Lowe’s son, who came back to the farm in the 1980s after working for a private company for several years.

“The farm is kind of in you,” he says, so he decided he “wanted to do something with it.” He certainly did do something with it, as today the farm features a restaurant, a dinner theater, an N.C. products barn, a bakery, a gift shop, Christmas shows and a wedding and event venue.

The Beulaville farm has been in Lowe’s family since 1945. Lucille and Jess had four children, all of whom went off to other jobs. Working swing shift in a plant (which was “a great job but different than what I was used to”), Lowe felt a tug back to the farm. Part of that tug came from his wife, Theresa, who suggested raising Christmas trees. “That was the main thing we did for several years,” Lowe says, “and it just kind of evolved from there.” 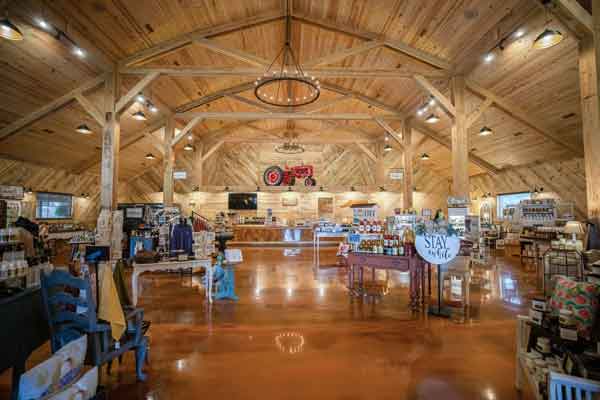 The first Christmas tree was planted in 1983. They began selling them in 1986 and then opened an office and a little gift shop. Other areas of the farm were added bit by bit year over the years, even as Mike continued working swing shift. He left his job to focus on Mike’s Farm full time in 1991.

“We had no fear,” he says. “We were young and kind of naïve at the time and didn’t have enough sense to worry.”

As it turns out, they had no need to worry anyway. The farm continued to grow. They added a bakery in 1994 and the first part of the restaurant in 2001. Lowe says they built “all the old parts of the farm” themselves, which saved them some money. His father, who passed away in 2000, had spent time building houses himself, and Lowe adds they were all “raised to do stuff ourselves.”

After their first season with the restaurant operation, they knew it wasn’t big enough and expanded it in 2002. They added a banquet room and then added onto it again in 2005–06. They built another barn, primarily for weddings and special events, in 2014. Just last year, they opened the N.C. Products Barn.

Even with all the changes and expansion, the restaurant has continued to serve the same barn day dinner menu for the past 20 years. Mike’s Farm customers would have it no other way. In the early days, they rotated the vegetable side dish. However, when Theresa started making her now-famous macaroni and cheese, people got mad when they took it off the menu.

Fried chicken and pork are staples of eastern North Carolina and come from local farmers. “Fried chicken was always on the menu when we were growing up,” Lowe says. He credits his wife’s aunt for the amazing biscuits served at their restaurant. “They know how to put the right amount of pan grease to make the biscuits,” he says. “They just know how to cook.” 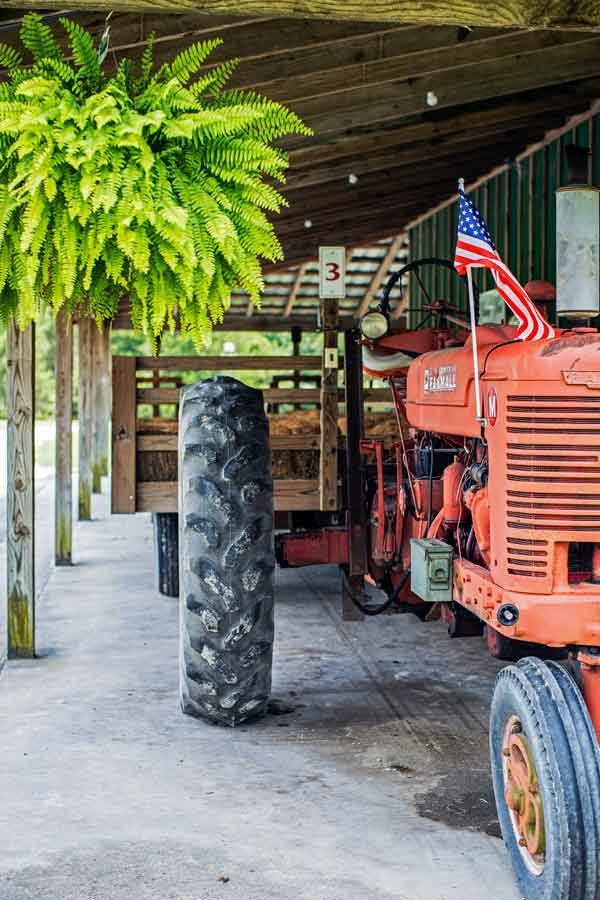 In 1997 Mike’s Farm began its Christmas displays. With the help of a retired friend who “kind of ramrods it,” Lowe says, they start setting up the displays in early November. It takes about three weeks to complete the show, which is so popular that people stand in line for hours waiting for the hayride to take them through the lights. “We rearrange and add stuff every year to keep it interesting and exciting for visitors,” Lowe says.

Dinner shows, often featuring the group Gaylon Pope and Sweetwater, were added because they became so busy at Christmas. The dinner shows usually feature a buffet-style dinner of — what else? — fried chicken, pork loin and gravy, country ham biscuits, mashed potatoes, macaroni and cheese, green beans, corn and a homemade dessert.

Christmas is a busy time for everyone at Mike’s Farm, as visitors flock in to have dinner, enjoy the shows and see the light displays. Ten months out of the year, the farm has about 50 to 60 employees. That number increases to 120 to 150 to handle the Christmas crowds. “Over the years, everybody’s got accustomed to there’s going to be a line, there’s going to be a wait,” Lowe says, but he adds that they all take it in stride and thoroughly enjoy the whole experience.

Mike’s Farm is still a working farm as well. They had a good strawberry season this year. They also raise pumpkins and apples, often holding educational programs around the operations of the farm. During normal times, they will do school tours with pumpkins and have in the past also done apple tours, Christmas tours and Thanksgiving tours.

The Lowes’ daughter and husband also work on the farm. As to what the future holds for Mike’s Farm, Lowe is hoping it will remain in the family for years to come. As he says, “It’s in your blood here.”