Pender County Schools is pleased to announce the hiring of Dr. Michael Bracy to serve as interim principal at Topsail High School. Bracy will assume the role on October 1 as current principal Chris Madden steps down to pursue another opportunity.

“Getting the chance to work in a school, directly with teachers and students is something I’m extremely excited about,” Bracy says. “Education has been my passion for more than 30 years, but after serving in district-level administration, I’m really looking forward to being more hands on and helping our students grow daily and the staff help them in that process.” 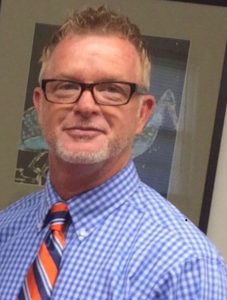 During a career that has covered more than three decades, Bracy has served in a variety of roles, starting as a teacher Southwestern Elementary in 1990. The Bertie High alumni went on to earn his doctorate from UNC Wilmington, serving as a teacher, assistant principal, principal, district administrator, NCDPI consultant and superintendent along the way. In December 2019, Bracy retired after serving as Jones County superintendent for more than a decade.

Bracy’s wife, Kristie, is also a lifelong educator, currently working in Onslow County as principal at Stateside Elementary. His son, Carter, is stationed in New Mexico with Air Force, while his daughter, Kennedy, is currently enrolled in the nursing program at ECU.

Bracy takes over a school that has continued to make great strides under Madden’s leadership. Topsail was among the top 100 high school schools in the state of North Carolina according the 2020 rankings by U.S. News and World Report.

Over the past decade, Madden served as assistant principal at Topsail High before taking on the principal duties at Cape Fear Middle, Topsail Middle, Pender High and Topsail High. He will transition to a principal role with New Hanover County Schools in the coming days.

“I am so grateful for all the opportunities Pender County has provided for me since starting here in 2009,” Madden says. “I am so proud to have worked with so many amazing people and to help so many students on their journey. Leaving to pursue another opportunity was the hardest professional decision
I’ve ever had to make. I want to thank all the communities in our county I’ve gotten the chance to work with for their support. I hope I helped our students and staff better themselves as much as they helped me better myself.”

The search for a permanent replacement to fill the role of principal at Topsail High School is currently underway.