It only takes one walk on the beach in the middle of summer to see why Topsail Island is a turtle sanctuary. During the height of the season, it’s not unusual to see 100 nests staked out along the dunes, waiting for baby hatchlings to emerge and find their way to their new home in the ocean. Loggerhead turtles love Topsail and come back every few years to lay their eggs here.

The task of finding these nests goes to a group of dedicated volunteers known as the Turtle Patrol. While the Karen Beasley Sea Turtle Rescue & Rehabilitation Center in Surf City does amazing work with sick and injured turtles throughout the year, the Turtle Patrol is getting up early, staying up late and watching for signs of new nests and new baby turtles throughout the summer months.

Starting in May, the group of several hundred volunteers walks all 26 miles of beach on Topsail Island every single day, rain or sun, looking for tracks. The group is led by Terry Meyer, who has been volunteering to help save the turtles since 1996 and directing the Turtle Patrol program since 2000.

Meyer is also the point person for people who find stranded turtles and is responsible for doing all the reporting for the state on turtle activity on the island. She also conducts new volunteer orientation sessions each spring.

The 26 miles of beach are divided into five sections for the Turtle Patrol. Each of those sections is led by a coordinator or, in the case of the far north end, three coordinators. Connie Pletl, Pam Kosar and Marie Palmer co-coordinate the volunteers on the north end of the island, which is typically the busiest area for turtle nesting. 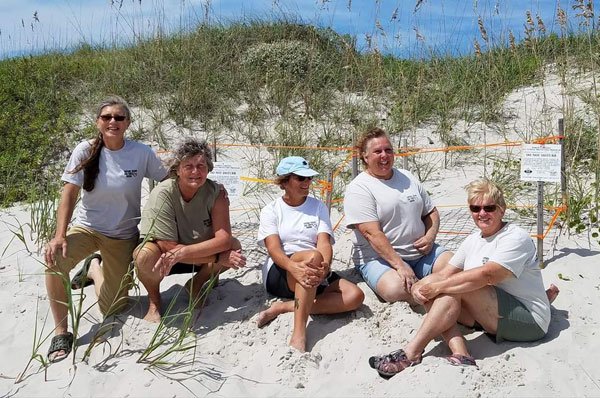 Every morning from the first of May through the end of August, all eight of the coordinators must get up and get dressed before the sun rises so they can be ready for that phone call. Some mornings, they get multiple phone calls.

The walkers find tracks that may or may not lead to a nest. The coordinators must go out to the beach and check to see if eggs have been laid or if it is what is known as a “false crawl.” Sometimes the mother turtle decides it’s not the right spot or she gets scared off by people or noise in the area.

On the far north end, it is Pam Kosar who gets the calls from the volunteer walkers. Kosar has been volunteering since 2006, starting out as a substitute walker.

When a volunteer calls in to say they’ve found tracks, Kosar then calls Palmer and Pletl so they can all go out to the beach to check out the situation.

When they confirm that there is a nest with eggs, Pletl’s responsibility is to collect the data and send it to Meyer. Pletl started out as a volunteer walker in the early 2000s, having learned about it as a freelance writer and editor for the Topsail Voice newspaper. The turtle hospital was among her assignments and, after getting to know founder Jean Beasley well, Pletl decided it was time to be part of the turtle project herself.

About 60 days after the nest is laid, the eggs will start to hatch. At that point, Palmer takes on the responsibility of coordinating volunteer nest sitters. The first step in helping the hatchlings find their way out to sea is to build a “ramp,” a smooth track that leads directly to the water. 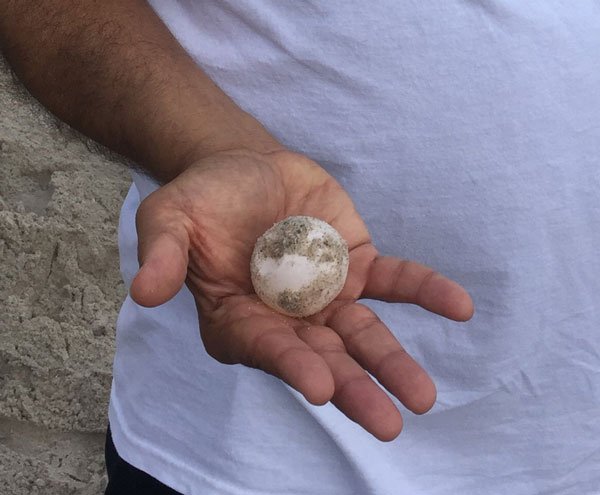 Then Palmer will need to enlist at least five or six volunteers to sit with the nest and make sure the baby turtles make their way to the water. The volunteer nest sitters might also have to knock on doors of nearby homes and ask them to turn off their outside lights to eliminate the distractions for the young turtles.

Palmer, who has been volunteering since 2014, relates that one of her most memorable times sitting with a nest was when the eggs hatched during a full moon, saying it was a “spectacular” moment. Another instance involves hatchlings that were enticed by bright lights on a home nearby and ended up going the wrong way. She and Pletl, along with a very helpful and concerned family, helped 90 baby turtles find their way back to the water that night.

Meyer, the coordinators and the hundreds of walkers and nest sitters are all volunteers, dedicating their time each and every day to give the turtles a better chance at survival. In the early days of the Turtle Patrol, walkers would have several days a week assigned to them.

In fact, Meyer recalls being asked how many days she could walk in the beginning. Now, as more people become interested, the volunteer list has expanded, and each walker is typically assigned one day a week for about a mile stretch of beach. There is also a list of substitutes, volunteers willing to fill in when needed if the regular walker is sick or on vacation.

During the summer, volunteering on the Turtle Patrol can be an all-morning and all-evening activity. The nest sitters, who can be the people who first found the tracks as well as other volunteers, will spend several hours each evening waiting for that exciting moment when the first baby emerges out of the sand. 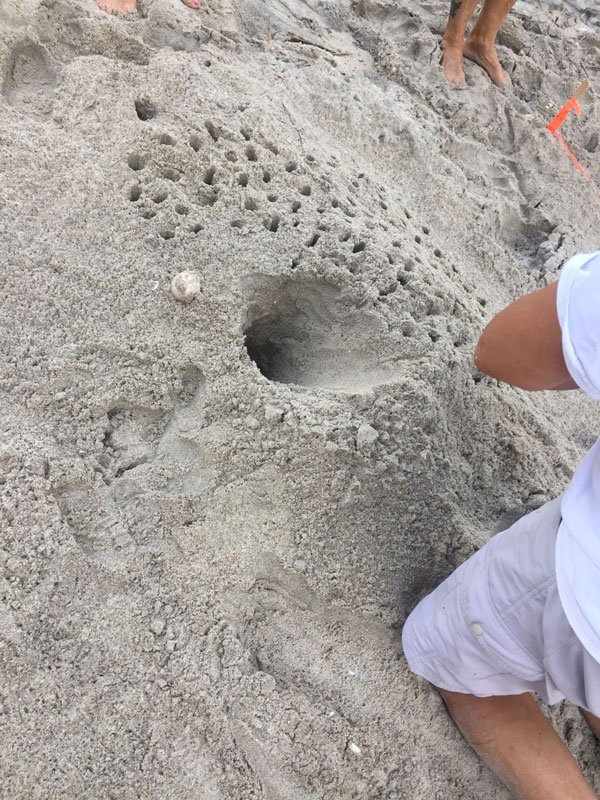 Kathy Zagzebski, director of the Karen Beasley Sea Turtle Rescue & Rehabilitation Center since February, says the Turtle Patrol volunteers have “an amazing amount of dedication.” They are not only helping to save the amazing turtles that live “in our own backyard,” but “at the same time, they are contributing to a worldwide body of knowledge.”

The data that is gathered from the nests, Zagzebski emphasizes, is “really important to understanding sea turtle biology.”

The volunteers on the Turtle Patrol, especially the coordinators who collect and submit all the data around the nests, eggs, and hatchlings are “contributing to a worldwide body of knowledge.”

Zagzebski is excited about the grassroots efforts to protect the turtles on Topsail. A big piece of that is the education aspect of their work. It’s important to the volunteers to be able to share information about the turtles with residents and visitors as they investigate potential nests and watch for hatchlings. Teaching others about the importance of turning off lights, filling in holes and picking up trash along the beach is a critical part of the turtle project.

Sharing their knowledge of turtles is incredibly rewarding for these volunteers, as is the ability to do their part toward helping the sea turtles not only survive but also thrive here on their sanctuary island.