The PubScout scopes out the Topsail craft beer scene and reports back with good news for beer (and pizza) lovers.

To help launch my newest writing gig with this magazine, the missus and I traveled up Topsail Beach way to find some local beer and food spots. And while two of the spots we found had great beer and an equally great vibe, but no food, one of them completely removed the stigma from “Southern” pizza.

That the three places are relatively close to one another makes it even better, and you can sample all three (as we did, coming from more than an hour away) or, if you’re closer, or better yet local, hit them all at your leisure.

Hopsail Island
The first place we stopped was Hopsail Island, a craft beer and wine shop housed in a clean, home-like facility. Travis Stafford is the owner, and he got started in the beer business just about two years ago because a few of his college buddies owned beer bars. Under their guidance, Stafford opened up Hopsail Island.

Stafford’s place has some really outstanding beers on draft, the most potent of them clocking in at 9.2% ABV. (An N.C. law limits the ABV of beers at 14%.) What’s more, the gal serving them is one of the savviest beer mavens yours truly has ever encountered. Her name is Cassandra Brewer, and if you have any questions about any beer on the menu, she’ll answer them. Accurately, too. She attended the Craft Beverage Institute of the Southeast in Asheville, so she knows of what she speaks. Stafford knows he has a gem in Cassandra. 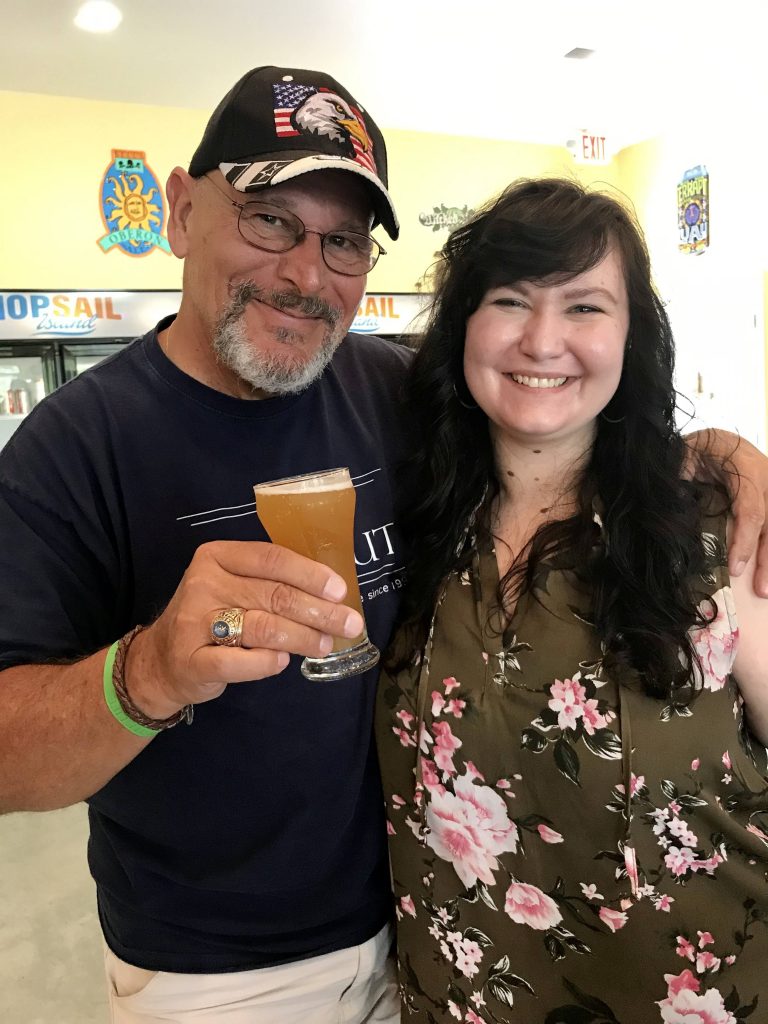 It was she, in fact, who managed to secure a keg of the as-yet-unreleased Rising Cloud IPA from Blowing Rock Brewing. On her recommendation, I had both a sample, then an 8-ounce glass. It’s a winner. I also tried a nine-ounce pour of Wilmington Brewing’s Blair’s Breath (7% ABV), a smooth, silky stout with cacao nibs, coffee and lactose. Very solid.

Hopsail Island runs specials, like the Tuesday 20% off Growler Fills promotion, and a food truck from Coastal Wing and Spirits Co., also owned by Stafford, supplies victuals. There’s an outdoor area with tables for socializing, quaffing and cornhole. And Cassandra keeps the indoor shelves stocked with grain-based goodies for those who want even more variety to take home. Wine is also available.

For some very nice beers, and Cassandra’s bright brand of beer banter, pop in to Hopsail Island.

The Peak Taphouse and Kitchen
My interest in The Peak Taphouse and Kitchen, not far from Hopsail Island, was piqued by numerous Yelp reviews praising the beer list. Coming from the Tri-State area, where pizza is practically a recognized religion, I confess to snickering a bit at the comments extolling the pizza served here. I mean, nice as it is, this is still North Carolina, right? This part of the state knows sea turtles, sunshine and seashore, not pizza. I was in for a very big surprise, but more about that later.

The Peak Taphouse and Kitchen is a small place. So small, you have to go outside to change your mind. And until the owners broke down an adjacent wall to put in the kitchen, it was even smaller. But it does have a solid beer selection, which rotates regularly. Andy, whose wife is an owner, does all the beer ordering, and he happened to be sitting at the bar in one of the 10 seats. He’s also the guy responsible for the pizza recipe, but more about that later. 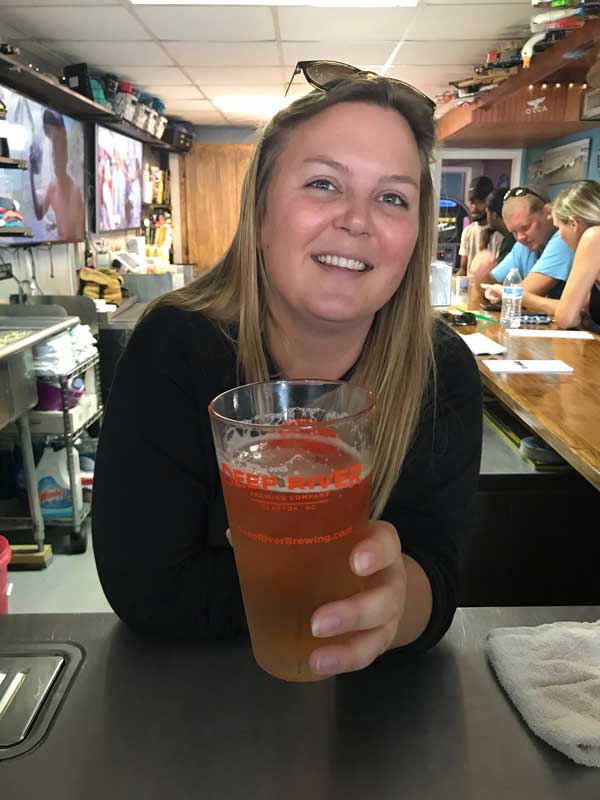 “The Peak Taphouse and Kitchen prides itself on having the largest craft beer selection … on the island. We have 20+ rotating taps, a large selection of cans and bottles, and a selection of wines and ciders also available,” reads the website blurb. It also boasts the “freshest pizza on the island,” but more about that later.

Our server, Kelsey, was friendly and knowledgeable about the place, which shouldn’t surprise anyone since she began her time there as a regular at the bar. After becoming intrigued with the many intricacies and nuances of craft beer, she became somewhat of a self-taught expert. And when a spot opened up behind the bar, she jumped when it was offered.

When I asked her what factors go into Andy’s beer choices, she said, “He puts on what he likes and what he thinks the customers will like.” That seems to be a policy down here, as a previous review about a new beer emporium was entitled “Beers We Like.” Makes sense, though. What’s the point of owning a joint if you can’t have the beers you enjoy?

I limited myself to one — Yachty by Nature, a 6.5% NEIPA- from Deep River Brewing — on Kelsey’s recommendation, and it was quite good. The missus opted for a Peach Beerlini Radler from Left Hand. She enjoyed the first few sips — hey, it was hot out —but as she continued, the Radler’s sweetness became a bit off-putting. And it didn’t pair well with the pizza. More about that now.

First, any and every 10-inch pizza is just $9.99, and there’s no limit to the toppings you can add to it. Every pie is made personally, so expect to wait a bit if it’s crowded. But the wait is worth it. This is an exceptionally tasty, very thin-crusted, well-made pizza. The only way you can screw it up is by putting too much stuff on it, which will mask the taste of the crust. But if you add the right toppings, you’re in for an epiphany, even if you’re from the Tri-State.

That’s also if there’s any left when you get there. The Peak, named after the peak of a wave, only produces 100 pies a day — maybe 120 on a special day like July 4. And when they run out, that’s it, baby. No more till the next day. Kelsey told us that in season, there might be 20 people waiting for their pies inside, with more seeking ingress outside the door. If she gets a call for an order of pies, she has to apologize and invite the caller in to stand in line, as she is loathe to shortchange the customers who’ve been waiting.

Kelsey also added that during the summer season, her loyal locals usually avoid the crowds, returning in September, when they’ve gone. And, she says the drop-off in business is barely noticeable. So it appears as though both in – season and off-season are The Peak seasons.

With a nice beer list and pizza that would satisfy Tony Soprano, that’s not surprising.

Salty Turtle Beer Company
Since moving to southeastern North Carolina in March, I’ve not had any difficulty adjusting to the lifestyle or paying the lower taxes. But this transplanted Yankee has noticed one thing about the regulars here, beyond their accents and their frequent telling me to “bless my heart.” I didn’t know they were all budding cardiologists down here.

But I do know they have a thing for sea turtles — and it’s a very passionate thing, every bit as passionate as that displayed by Giants and Jets, Yankees and Mets fans (well, maybe not Mets fans so much) during football and baseball seasons.

Here it’s “protecting, nurturing and helping little sea turtle hatchlings find their way to the sea” season. And the passion is real and very deep. 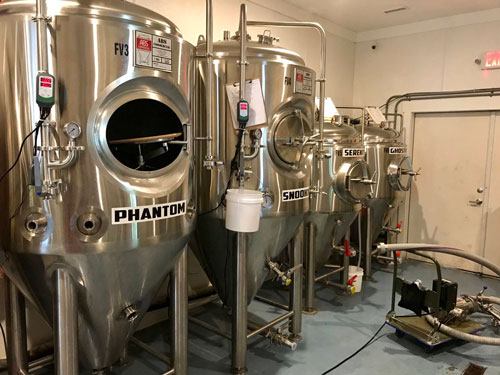 Which is why Salty Turtle Brewing Company is named what it is. Its logo is a hop flower with turtle legs. Its raison d’être is two-fold —producing good beer from its current three-barrel system (soon to be expanded to seven in September), and supporting “Karen Beasley’s Sea Turtle Hospital and other local organizations that will give back to this community of ours.” There are even tanks in the brewhouse dedicated to and named for various turtles in the hospital, like Pirate, Phantom, Snooky, Serenity and Ghost.

Veteran-owned (Dan Callender and Dean Kelley are both Marine vets), the brewery has been a dream of its two main owners for many years. Having begun as homebrewers (is there a brewery owner who hasn’t?), the men have separate responsibilities. Dan runs the front of the house, and Dean does the brewing.

And he’s doing a lot of brewing, pushing out sufficient product for 10-plus rotating beers on a 3-bbl system is no small feat. Especially if quality matters — and it does here. Interestingly, while most brew pubs and taphouses will pour you an 8- or 10-ounce glass for a reduced price over that of a full pint, Salty Turtle also offers a very smart 4-ounce pour in its own special glass for just two bucks.

This, and the standard four flights for eight bucks served in an N.C. shaped holder, allows the beer nut to sample of variety of what Dean generates before deciding on a larger portion. I had a very decent Coastal Kolsch, a very respectable and interesting Fog of Topsail, a tasty Manila Mango, a very good Hey Zay NEIPA and an outstanding Swingbridge Breakfast Stout. There are also ciders and wines available, all poured by a friendly staff. And if you get hungry, you can go next door to Travis Stafford’s Coastal Wing and Spirits Co. to fix those hunger pangs.

For The PubScout’s money, drinking good beer is always a positive. But knowing that a goodly portion of it is going regularly to a good cause makes the experience even better. And totally different than going to Citi-Field and paying $11 for a PBR. With zero guarantee your team is even going to make it to the water’s edge.