The Show Goes On

Sneads Ferry Community Theatre has been entertaining locals since 2002 and shows no signs of slowing down.

Theatre is alive and well in Sneads Ferry, where throughout the year members of the community come together to put on several productions — some of which come with dessert.

Sneads Ferry Community Theatre (SFCT) has been a fixture in town since 2002, when founder Julia Eller first had a vision of community theater in Sneads Ferry.

Eller engaged her love of the theater to put together a cast of volunteers for the first SFCT mainstage production, Nuptials, which was held at Dixon High School. Shortly afterward, they moved to Sneads Ferry Community Center and SFCT was included in the Sneads Ferry Community Council as a Standing Committee. The theater group has been going strong ever since, even though Eller passed away in 2009, sadly while in the midst of reprising Nuptials as part of the group’s seven-year celebration. 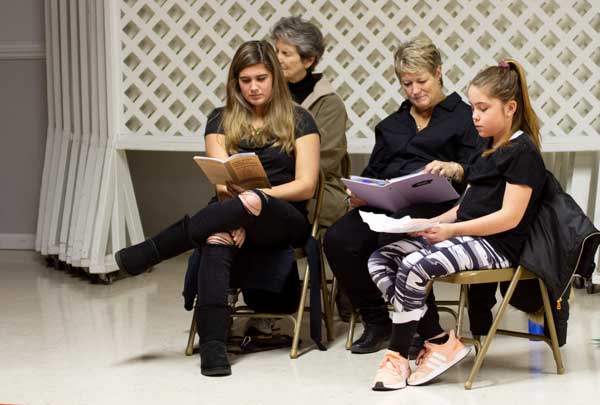 Today SFCT is led by a board and a host of committees that are assigned responsibilities such as setting up the house, publicizing the programs and reading scripts. Everyone is a volunteer, including the cast, crew, directors and those who help with promotion and logistics. In 2020 the actors range from an 11-year-old to a 92-year-old. The 11-year-old is a veteran actor. Hilda Jameson, the 92-year-old, performed in her first stage production this year, along with several other new actors.

Many SFCT actors, including Mary Grossnickle, have been with the theater for several years. Originally from Wales, Grossnickle moved to the Sneads Ferry area from Manhattan in 2000 and started volunteering with the theater in 2006, when Julia Eller talked her into joining. Grossnickle had enjoyed “off-off Broadway” shows in Manhattan and, after attending some SFCT performances, volunteered to help with costumes and stage props. Her husband joined her, and they became house managers.

Grossnickle began acting with SFCT in 2010 and this year took on her first lead role in Sorry, Wrong Number, even though she says, “I never thought I could ever act.” She encourages others to get involved. Opportunities for volunteers are varied and she says, “I’ve enjoyed it all,” including the camaraderie of all the people involved in putting on the performances.

Sue Ferber runs the show as the Steering Committee Board Chair. Ferber became involved in SFCT in 2012, shortly after retiring and moving to the area from Las Vegas. With a degree in senior adult theatre, she has always been involved in theater in some form while working in banking for 30 years. She has been an actor, a director and a volunteer helping others learn about the theater. Ferber says she is heavily involved with the SFCT because “it’s what I do.” 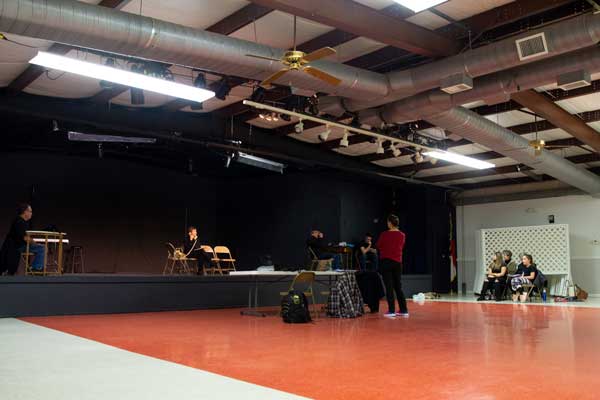 Productions at SFCT are either Mainstage or Readers Theatre. In 2020 the Mainstage shows are On Golden Pond scheduled for September and Anne of Green Gables scheduled for November. Mainstage productions always kick off with wine and cheese before the Friday night performance.

While Readers Theatre may sound like the audience simply watches actors read their scripts, at the Sneads Ferry Community Theatre the concept is quite different. There are sets and costumes. Most of the actors have already memorized most of their lines, so there is truly very little “reading” involved. And there is dessert. SFCT’s Readers Theatre productions are also called Dessert Theatre, as dessert is served at intermission to the audience, who are seated at tables rather than in rows of chairs.

Productions are typically scheduled for Friday night and Saturday night at 7 pm and Sunday afternoon at 3 pm. Ferber says that they have surveyed audiences to find just the right day and time. Performances are generally held in late winter or early spring and the fall.

Scheduling is a challenge each year as the Sneads Ferry Community Center, where the productions are held, has become a very popular venue in the area. Special events, wedding receptions and parties are often booked at the center throughout the year as well. When looking at scheduling for the upcoming year, Ferber notes, they must find two consecutive weekends and a full week prior to the first performance available at the center.

Volunteers on the Script Reading Committee read through possible scripts prior to the production year, gauging appropriateness and potential audience interest. They also have to consider whether a director might be interested in a particular script. Once the scripts are chosen, the director holds auditions and the process of preparing for their performance begins. Through those audience surveys, SFCT has found that mysteries, comedies and musicals are the most popular types of performances.

Sneads Ferry Community Theatre is part of the Sneads Ferry Community Council, along with organizations such as the Sneads Ferry Shrimp Festival and Christmas in the Ferry. All money passes through the council, including the costs of royalty fees, costumes and stage props as well as the incoming ticket revenue. Admission to shows is $10 ($5 for students). Ticket prices have not been raised been “in a long time,” and, Ferber says, “we’re not going to.”

As for the future of Sneads Ferry Community Theatre, Ferber wants to “keep building.” She would like to see more volunteers and more audience members. She adds that coordinating and managing theater productions is “a lot of work but it’s fun!” All involved agree that it’s a great collaboration that is meaningful to the volunteers and good for the community.

Want to play along?
To learn more about the Sneads Ferry Community Theatre, visit their website at sneadsferrycommunitytheatre.com or call (910) 327-2798 and leave a message at the box office.

Auditions for On Golden Pond by Ernest Thompson will be held at 7 pm on July 21 and 22. The show will run in September.

Auditions for Anne of Green Gables, adapted by Jody Johnston Davidson from LM Montgomery’s book, will be held September 22 and 23. The show will run in November.

Volunteers are also needed for each production, for staging, costumes, promotions and logistics the day of the performance.