The Mystery of the Beach Blacktop

Why are there remnants of blacktop road in the sand at the water’s edge on North Topsail Beach? Writer Pat Fontana wanted to know and shares her discoveries.

When the tide is very low on North Topsail Beach, small sections of blacktop appear on the ocean floor at the edge of the water. Along the beach, depending on the strength of the tide, several small pieces of blacktop are strewn randomly on the sand. Where did the blacktop come from? Did a road once exist where now residents and visitors play in the sand and water? Did a major storm wash pieces of the road into the sea?

The answers to these and so many other questions about the mystery of the beach blacktop point to several incidents in the 1980s and ’90s. The original road, which began as a section of N.C. Highway 210 and then became Secondary Road (SR) 1568, ran very close to the dune lines on the ocean side of North Topsail Beach. The road was often washed out or covered in sand from high tides or storms. In fact, Stephen Gurganus with the North Carolina Department of Transportation (NCDOT) says that a crew was stationed on the island to “push sand so traffic could get through” after the washovers. 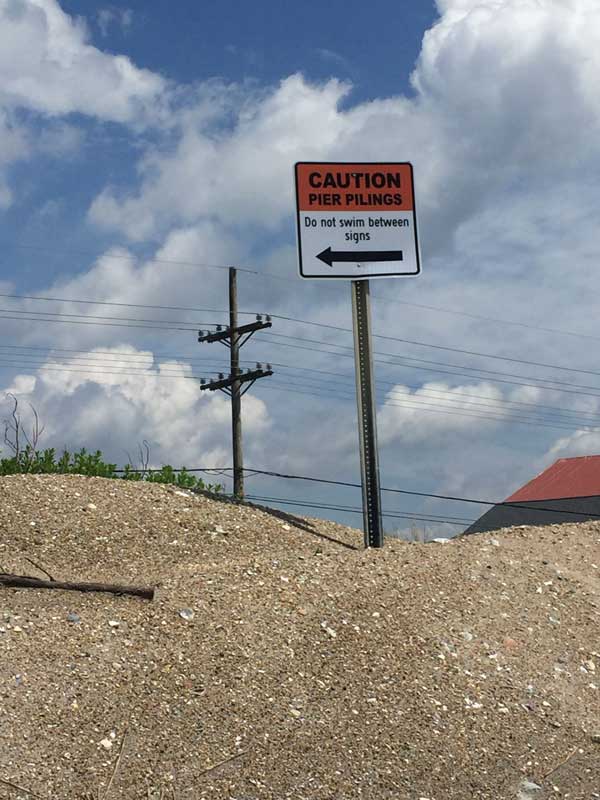 One possible explanation for the mystery involves two developers and two sections of that road. Marlow Bostic bought his first property along the Intracoastal Waterway in Sneads Ferry in the early 1970s. Then he set his sights on the island across the waterway, specifically on developing a condominium complex toward the northern end. Bostic asked the state to move the road inland, so he could build St. Regis Resort and Condos as oceanfront property.

Another developer, Roger Page, was an oil distributor from Winston-Salem. In 1987 he agreed to pay to have about 4 miles of SR 1568 moved farther inland, so he could build a condominium complex that would sit between the road and the ocean. Page paid to move about 2.7 miles of the road, just to the northern edge of his new oceanfront development, Villa Capriani. 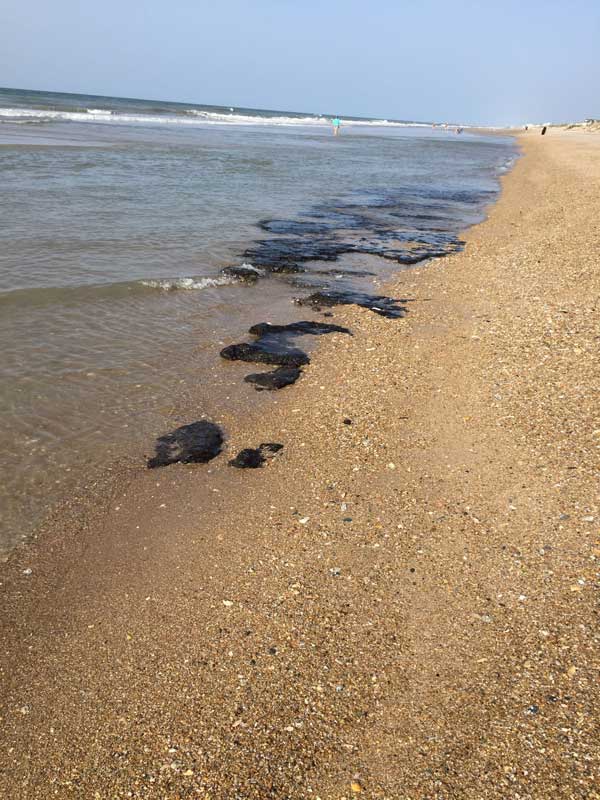 According to news reports at the time, once Page had the road where he wanted it so people could easily reach his new condo complex, he said that relocating the rest of what is now known as New River Inlet Road would bankrupt him. The state had to relocate the remaining 1.3 miles of the road and then sued Page to try to recoup the cost. Most of New River Inlet Road was rebuilt by the early 1990s.

When each section of the road was moved, sections of the old road were apparently left to wash away in the water. Long-time Topsail Island resident Bobby Humphrey says that is probably what we are still seeing today in the water at low tide. Humphrey also noted that the mysterious signs about pier pilings and the pilings themselves that occasionally show up in the water at about mile marker 19 are from an old fishing pier, McKee’s. If you go swimming, be sure to heed the warnings, as the remnants of the pier still rise up through the water there.

There were a number of fishing piers up and down the entire island in the mid- and late 1900s. Unfortunately, most of them were destroyed in storms such as Hurricanes Fran and Bertha, which both hit the island hard in 1996. These massive storms could also be one of the answers to the mystery of the beach blacktop.

Hurricane Bertha made landfall near Figure Eight Island on July 12, 1996. Just two months later, on Labor Day, Hurricane Fran arrived as the most destructive hurricane to hit North Carolina since Hazel in 1954. Between Bertha and Fran, a significant part of the new road was beaten up, torn up and washed away. One theory is that may well be part of what we still see today, floating in the ocean.

Several thousand feet of New River Inlet Road were washed away by Hurricane Bertha. North Topsail Beach was considered part of “ground zero” for Hurricane Fran. Topsail Island was almost completely overwashed by the storm tide, destroying most of the road that was only a couple of years old at that point. The damage was so extensive that the name Fran was retired as a hurricane name in 1997.

The next time you take a stroll along the beach at the north end of Topsail Island, you may see a piece of history, literally. That history may be the remnants of a road moved by developers who wanted oceanfront property for their condo complexes, or it could be the scraps of a completely new road, washed away by two destructive, back-to-back hurricanes. Relax and enjoy your walk, as you contemplate the mystery of the beach blacktop.