The Little Mermaid of Topsail

Have you ever seen the mermaid sculpture on the dock in Banks Channel? Here’s the story of how she got there and why her name Is Golden Girl.

At 4 feet from head to tail, the Little Mermaid has made a big splash on the south end of Topsail Island. She has traveled around the community watched tourists search for gold and enjoyed a makeover that gives her a special glow for boaters and swimmers admiring her from the water.

The mermaid made her way to Topsail from Mexico about 15 years ago. She found her new home at A Country Garden, a garden shop in Wilmington owned by Anne Blazinski. As Blazinski explains it, there was a man who traveled to and from Mexico and always came back “with an old trailer full of rusty metal items.” He would occasionally buy mermaids, and, Blazinski says, “Every time he had one, we’d buy it.”

Topsail’s Little Mermaid traveled from that garden shop to a home on Topsail Island when Phil Mayrand bought her from Blazinski and placed her on his front porch. Mayrand lived in the house that had been owned by his mother, a long-time resident of the island. Blazinski says the mermaid looked perfectly placed on the ocean. “It was ideal. She looked awesome,” she says. 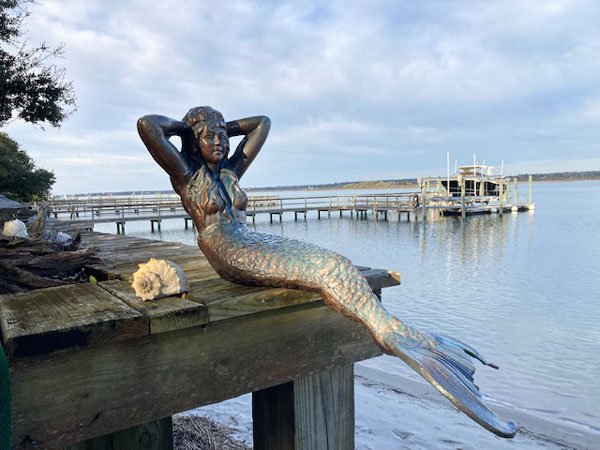 When Mayrand sold his house and moved to Florida, the new homeowners took possession of the mermaid and left her on their porch for all to enjoy. The mermaid lived with Carol Holcomb and Jean McClendon in the house for the next 10 years. When Holcomb and McClendon moved down the street, they took the Little Mermaid with them and placed her in their garden. She stayed there until the summer of 2021.

The current Little Mermaid owner is Cecile Broadhurst, Mayrand’s sister. When Holcomb and McClendon moved away, they asked if the Mayrands wanted her back, and they did. Now the mermaid sits happily on the dock owned by Broadhurst and her husband, Ed.

Broadhurst gave the mermaid a new name: Golden Girl. The Broadhursts live in an area of Topsail Beach known as Golden Pointe, and the mermaid, Broadhurst says, “shines in a golden tone in the morning and evening sun.” But theirs is more to the story of why the golden image is so relevant to that area. 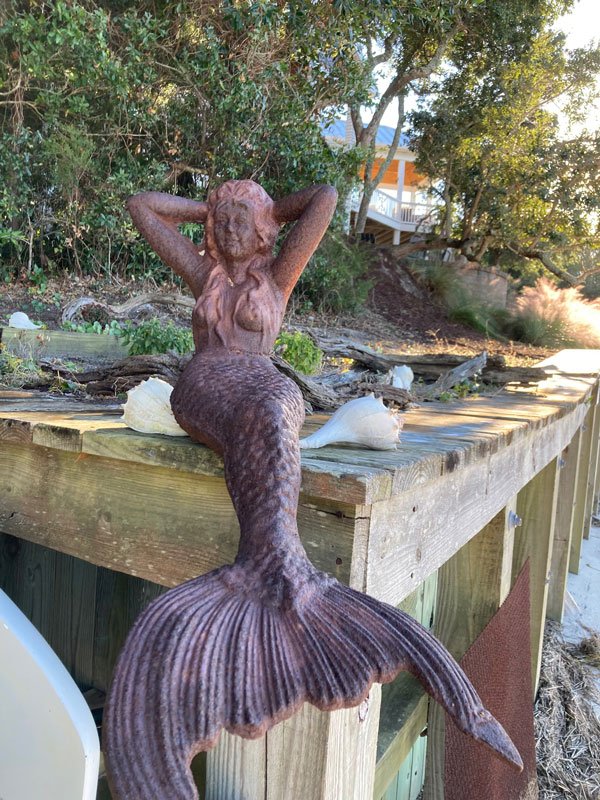 The Mayrand family, longtime property owners and residents of Topsail Beach, also owned the property that featured the famous, or some would say infamous, Gold Hole. The legend from this particular spot grew out of a story about a lost treasure that had been buried on the island. In the mid-1750s, a ship carrying gold wrecked off the coast. In the 1930s, a group from New York came to the island to dig for the alleged lost gold.

By 1941 the group had dug a very large hole, now known as the Gold Hole, but they left mysteriously in the middle of the night, apparently empty handed. Broadhurst explains that during WWII it was discovered that “they were basically scamming investors.” Even though there is no gold, the legend continues. She adds that the hole is owned by two people now. “We sold the lot next to us on the sound and it straddles the land,” she says.

The Golden Girl herself, the Broadhursts’ mermaid, was not as shiny or golden when they first took possession of her. Broadhurst says, “My husband and I kept looking at her, thinking she needs to be spruced up.” So, they inquired about having someone to do some work on her, going through the locally based art gallery ArtExposure.

The gallery, based in Hampstead, promotes local artists and artisans. They recommended Cathy McInville, an artist who works with metal and is particularly adept with stained glass and iron. Broadhurst was very excited about the quality of McInville’s work. “Cathy gave her a new birthday suit. She’s really attractive now,” she says. 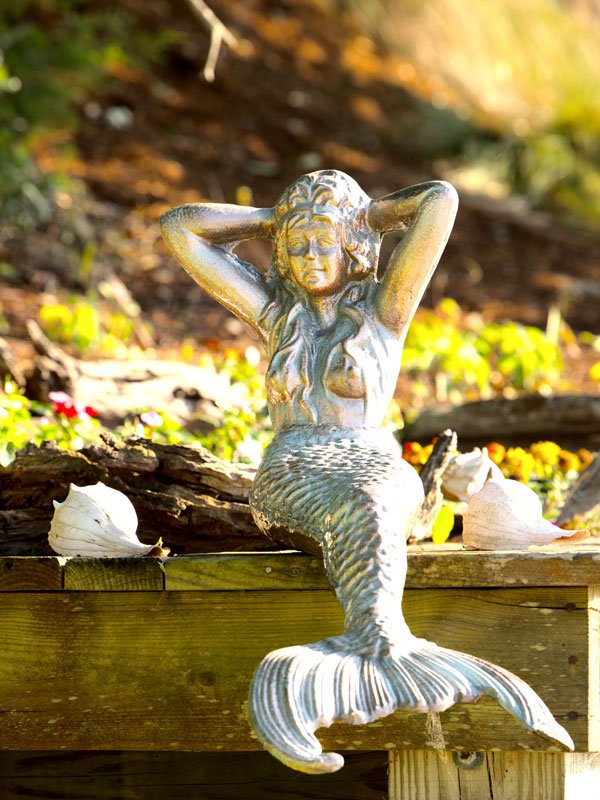 McInville says the mermaid was in pretty bad shape due to sitting by the water. McInville did quite a bit of work on the sculpture, cleaning up the pits and then putting an undercoat on it. She then sprayed her in golds and greens to give the mermaid a bronze look. McInville called the treatment, which also involved a brush and grinder to clean her up, “subtle but effective.”

The Little Mermaid now has a dark copper finish, with a look of patina, thanks to McInville. The continuing concern is how the refinishing job will do once she’s back near the water for a while.

Today, perched on the Broadhursts’ dock overlooking Banks Channel, the Golden Girl can only be seen from the sound. She shimmers in the sun, particularly in the early morning and late afternoon, marking the spot of the legendary Gold Hole in the aptly named Golden Pointe of Topsail Beach. With a seashell tucked under her for balance and stability, the mermaid is, as Broadhurst says, “a work of art, and a beautiful lady with a story to tell!”