After completing a pavilion project at VFW Post 9983 in Holly Ridge, Hampstead teenager Noah Witkowski is one of the youngest Eagle Scouts in the United States.

He’s an Eagle Scout, an honor only awarded to 2 percent of all Scouts, and he’s one of the youngest Eagle Scouts in the United States. Boys who earn this honor are usually closer to 17 years old.

Eagle rank takes determination and hard work to earn badges, participate in activities, show Scout spirit, hold positions of responsibility and plan, design and carry out a service project. Witkowski conquered it all. He earned 66 badges — 45 more than the requirements for Eagle rank — and earned nine Eagle Palms, which are awards presented for earning badges beyond the requirements. Witkowski hiked 137 miles, some of it on the Appalachian Trail, camped 73 nights and performed 208 hours of service to his community. 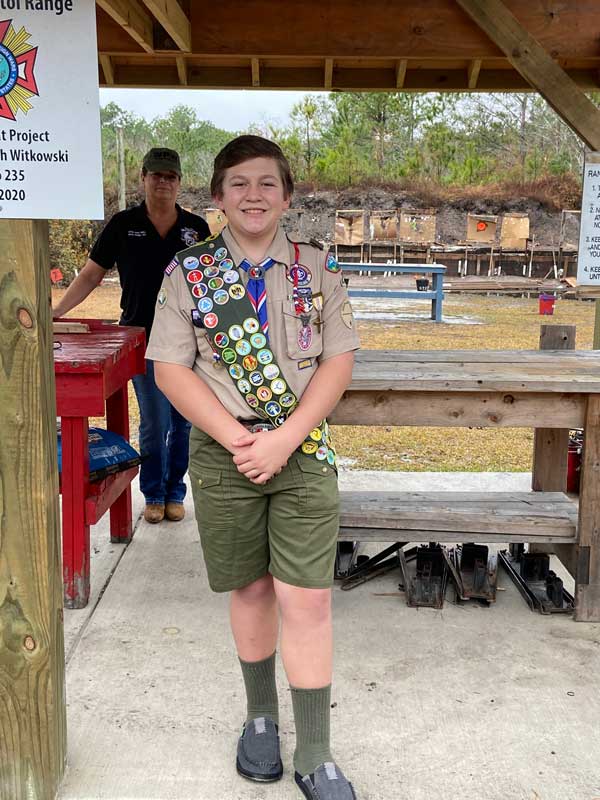 “I was determined to get my Eagle rank as soon as possible,” he says. “I heard my three older brothers say they wished they would have completed it.”
Standing nearby, his mother smiles and says, “Sibling rivalry helped a lot.”

Scouting is a family affair. Witkowski’s mother was a den leader, his dad a scoutmaster, and three siblings were involved in scouting, but Witkowski is the first to earn an Eagle.

Witkowski’s brother, Grant Simme, a K9 officer with the Pender County Sheriff’s Department, served as a one of Witkowski’s mentors as he worked toward his goal. Other mentors included Michael Martin, Siobhan Fargo, Sarah Gaither, Kenny MacVaugh and Bryan Smith.

“Noah is an exemplary person,” says Smith, who has been Witkowski’s scoutmaster for all his scouting years. “I fully expect Noah to continue engaging in leadership roles with our troop and with his Order of the Arrow Lodge. He is a young man of character. He certainly is an excellent example of the Scout Spirit, meaning he consistently and regularly follows the Scout Oath, Scout Law, Scout Motto and Scout Slogan.”

Other leadership positions Witkowski has fulfilled in the troop include Patrol Leader, Assistant Senior Patrol Leader and Order of the Arrow Representative. He is currently serving the troop as Chaplain’s Aid.

Witkowski says he became “all about Scouts.” He went to every camp out, signed up for every Merit badge class, went to four summer camps.
“In the troop, we camp every month, and that’s where you get signed off on the book (for badges),” he says. “I was elected a Patrol Leader and held leadership positions.”

“I loved my cooking merit badge class,” he says. “I make dinner for my family at least once or twice a week.” He received a gas grill last Christmas.

Merit badges consist of the old standards that Scouting is known for — backpacking, camping, canoeing and citizenship, but there are also some newer additions like American labor, animation and game design. Witkowski plans to earn all 135 badges.

“It was the most challenging,” he says with a laugh.

Witkowski had to continuously improve his fitness for 12 weeks. That meant if he took time off from working on the badge, he started all over again with running, jumping jacks, push-ups and pull ups and other feats of strength.

For his Eagle Scout project, Witkowski had a few ideas, but with three siblings in the Armed Services, the New Topsail Island Veterans of Foreign Wars Post 9983 in Holly Ridge was a natural choice. He designed and built a shelter at the shooting range with a little help from his friends, his parents and the community. Witkowski raised almost $3,000 to complete his project, and in addition to cash, he secured lunches for his helpers from two Holly Ridge businesses, Smoky Tony’s and Deli Works. Some materials were donated or discounted, and the VFW helped with work and snacks. 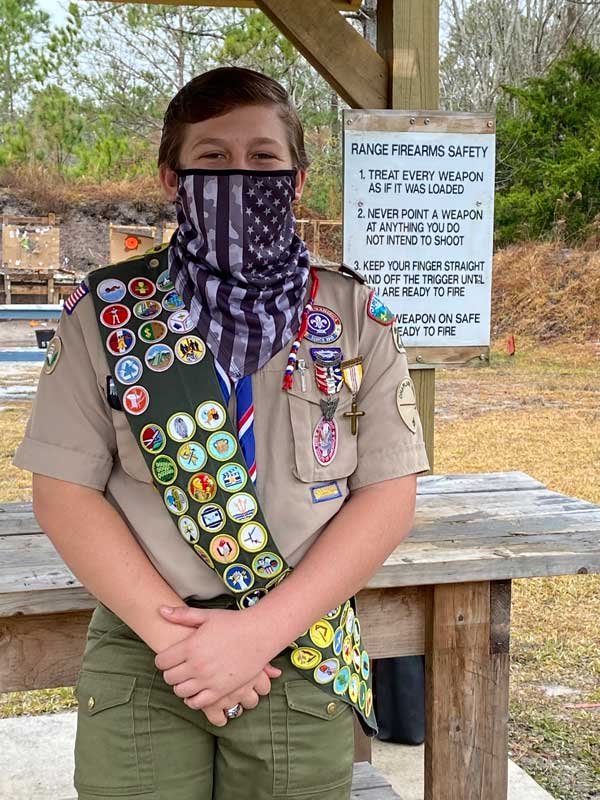 Witkowski’s friends and fellow scouts from Troop 235, Griffin Johnston, Connor Reiderer, Kelso Fargo and Alex Garcia, along with his dad, Michael, got busy last May. Members of the Post prepared the ground for construction. Working weekends, Witkowski’s crew poured concrete, nailed, hammered and shingled and screwed together the 16 x 10 x 8 structure.

VFW Post Commander Anna Cummings credits Witkowski’s personality for his success. “What’s that saying … only 10 percent of people are winners?” Cummings says. “Noah is in that 10 percent. He’s a hardworking, humble person, and that will open doors for him.”

Witkowski has visions of the future that include baseball, his favorite sport. He pitches for the Topsail Cannons, a local travel team, and would love a pro career. He plans on college, maybe at the University of Florida to play baseball and to study architecture or engineering. And, of course, he’ll continue with Scouting and hopes to attend World and National Jamborees.

The Boy Scouts of America say the Eagle Scout rank is a way of being that you achieve as a boy, but that you earn every day as a man. Noah Witkowski seems well on his way to becoming a man who makes a better world.