Surfers at the Heart of the City

In the movies, surfers are cool dudes hanging around the beach looking for a wild ride. In Surf City, surfers are environmentalists, community builders, fundraisers, parents and kids seeking the big swell and helping out around town.

Topsail Island Longboard Association (TILA) was created in 2017 to grow and support the next generation of surfers. It’s a like-minded community of local surfers in which more experienced boarders mentor newer ones by sharing surfing skills and life experiences. As a nonprofit organization, the 50-member surf club gives back to the local community in a variety of ways.

“The town is really important to us and we value our partnership,” says founder Cory Sydes. “We enjoy giving back to the community.”
Club members started by cleaning a stretch of the beach near the pier about three years ago. In 2018 they did the first island sweep — all 26 miles — in four hours with hundreds of volunteers, then had a party at Southside Park afterwards. “We had some great corporate sponsors for that event,” Sydes says. “We still clean the beach at the end of Roland Avenue every Monday and once a month in the winter.” 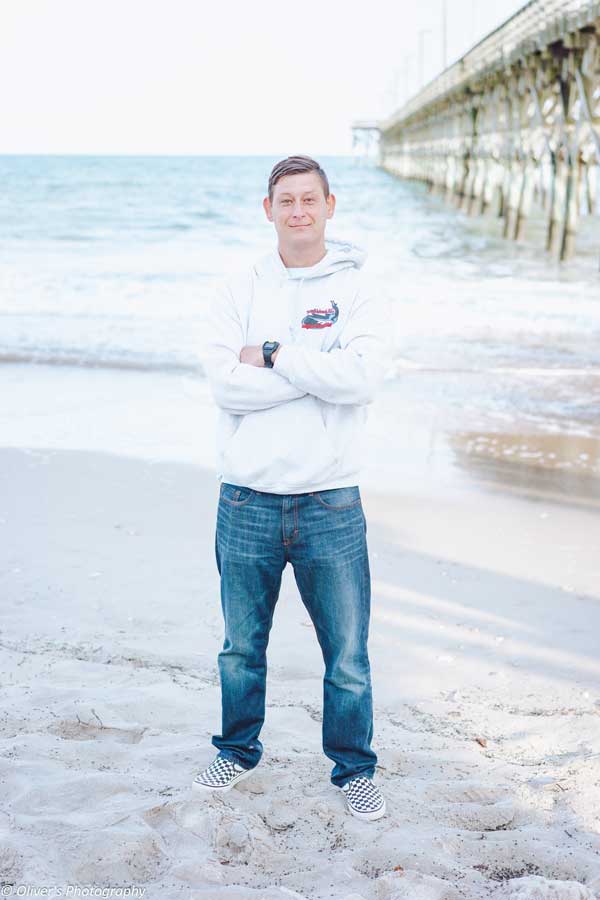 Dwight Torres knows both sides of the community-surf club relationship as a Surf City councilman and a TILA member. He praises the surfers’ positive impact on the community and the environment.

“We are extremely proud of the contribution our residents have made with cleans ups and charity events,” Torres says. “They give more than they take, and that should serve as an example to us all.”

Mayor Doug Medlin says the town benefits from TILA beach clean ups, their charity events and for stepping up anytime the town asks them for assistance. “They’re really a great group in our community,” Medlin says. 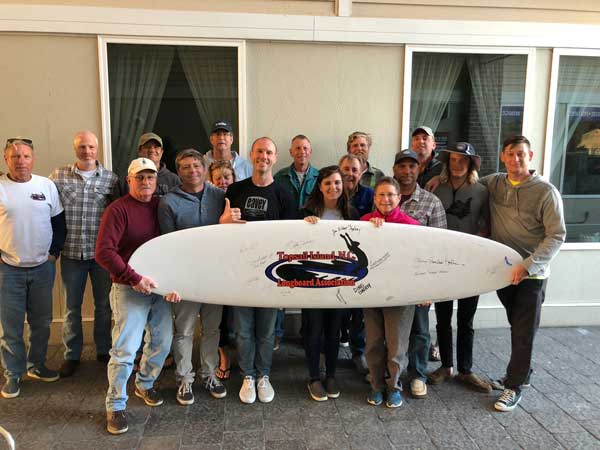 While known for their environmental work, the club also helped remodel a local VFW post — 40 people and four days — collected toys and funds for local families in need during the Christmas season, sent surfing gear and supplies to underprivileged kids in Venezuela through a partnering surf club and sponsors the Annual Fall Foamie Classic competition and Ocean Fest. Created last year by three surfers, Surf City Ocean Fest is a celebration of the ocean and surfing that benefits ocean-related charities and environmental causes. Ocean Fest 2020 is scheduled for October 10.

The Peak Taphouse and Kitchen, just up Roland Avenue from Surf City Ocean Pier, hosts monthly meetings of the Topsail Island Longboard Association. By the way, members don’t have to favor longboards. They can be paddleboarders, body surfers or non-surfing community supporters who share a love of the ocean. Many club members have surfed since their teenage days, and all ages and experience levels are welcome to join.

“We’re very diverse —members are teens, retired teachers, a council member, some ex-police and military folks and some rebels and wild people,” Sydes says with a laugh.

Membership is $25 per year, and they give you a tee shirt with the TILA logo, which changes every so often, says Chynna Lancaster, club treasurer and a local Realtor. “We have a local artist help with our art designs for the tees,” she says. “We also have local corporate sponsorships available.” 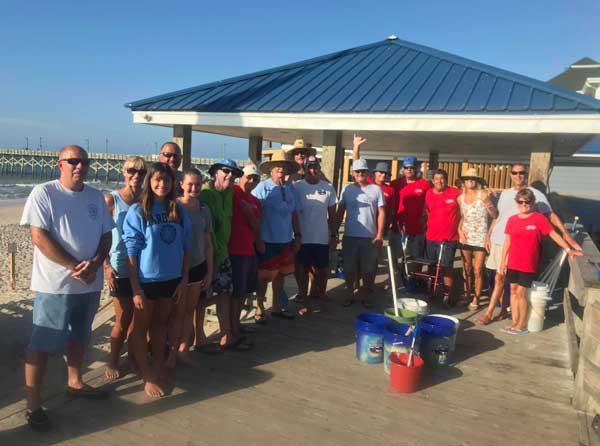 Influenced by professional surfer Bethany Hamilton, a competitive surfer who lost part of an arm in a shark attack and returned to competition less than a month later, Lancaster began surfing in her teens. She joined the club when she was the manager at 50 South Surf Shop, a local business that supports the club (https://www.surf50south.com). “I knew it would be a great to help the community and the environment,” Lancaster says. “I can certainly say it’s been fun to be around all of these awesome people.”

Humans enjoy sports for many reasons — the camaraderie of teams, the care of an athletic physique, the daring to reach a personal best. Surfers say the beauty and power of the ocean also calls in a spiritual connection.

“When you surf five days a week, you see and understand things differently,” Sydes says. “You become more in tune to your surroundings. In that moment on a board, you can see what you’re doing, how to do it, how to be in tune with the ocean. Sometimes, we just drop what we’re doing to go surf.”

Want to learn to surf?
Chynna Lancaster suggests starting with a foam board and advises not to become discouraged in the initial going because surfing is a practice that takes time to develop.

Sydes agrees: “Don’t expect to be a great surfer immediately. Surfing is a lifelong journey. You develop technique by repetition. You get away from the white water and begin to understand the board and the ocean. You can only get that from surfing regularly.”

They advise working with a local surf shop or surf school to learn the basics and to find the appropriate fit with a board and surf gear. “You don’t want to come to any harm in the water,” Sydes says. “Remember to surf with people of your own skill level. Keep a distance from surfers. If a board goes flying in the air, no one wants to get hurt.”

“It’s a lifestyle,” he adds. “We like to surf. We like to have a positive impact on the community. It’s what it’s all about.”