Holden and Hunter Griffeth have been on surfboards since they were old enough to walk. Now the brothers want to share their passion and get others on a surfboard at the Topsail Island Surf School. Launched just this season, they bring surf lessons to you at your beach house. You’ll be catching waves before you can shout “Yewww!”
Holden has surfed up and down the North Carolina coast and in Florida, Puerto Rico and Hawaii. He plans to surf in Bali, a surfer’s paradise known for its consistent waves and near perfect reef breaks. Reef breaks can occur in deep water where the presence of a reef causes the waves to break. This is a bit similar to how the sandbars off Topsail Island cause wave breaks, he says.

A December graduate from Topsail Island High School, Holden spent the winter in Hawaii. He came home and launched the surf school with the help of his brother, Hunter, who also teaches at the school, and with the “awesome support” of their parents, Tessa and Danny Griffeth. 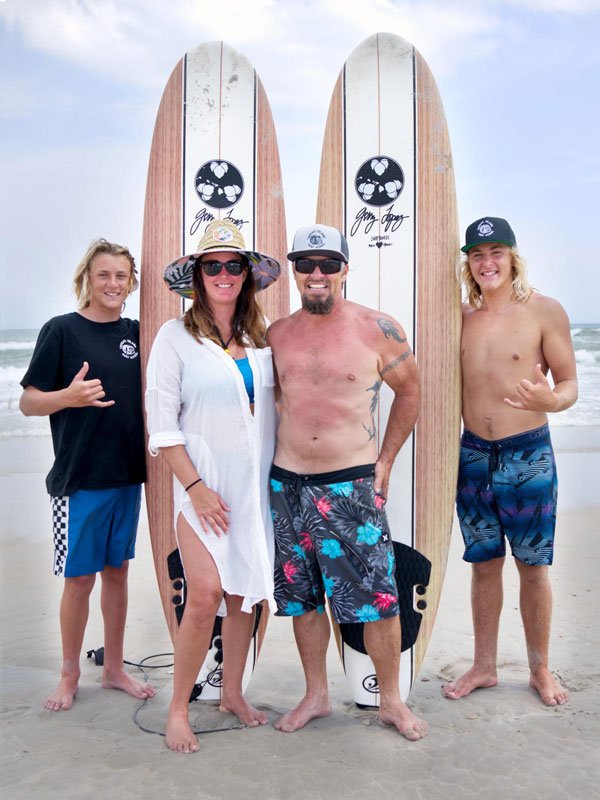 Holden was a competitive surfer and held records for his age when he was younger, but now he prefers free surfing. So does Hunter. Both are in the water almost every day. “If it’s a watersport, we do it,” Hunter says.

The Griffeths bring foam surf boards to the lesson; these are boards light enough that children can use them.

A typical lesson begins with Holden sharing general knowledge of surfing, explaining about the tides and winds – what makes good surfing and what doesn’t. 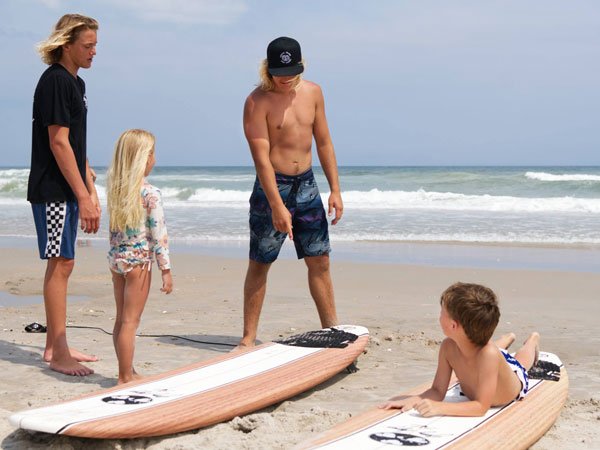 Waves are formed by wind blowing over the surface of the ocean. That energy is transferred to the water and creates a swell, a group of waves. On shore winds make the waves choppy or bumpy. Offshore winds make good surfing in part because they can delay the break of a wave, giving the surfer a longer ride.

“On shore winds are not the best, blowing from the ocean to the shore. Offshore winds are what surfers like and it blows from the shore to the ocean,” Holden says.
Once students have a basic understanding of wind and waves, Holden demonstrates how to pop up from a seated position to standing, and before anyone enters the water, he teaches water safety. In less than a half hour, Holden and Hunter will have students on the water sharing their passion and hoping the students catch the joy of riding a wave. 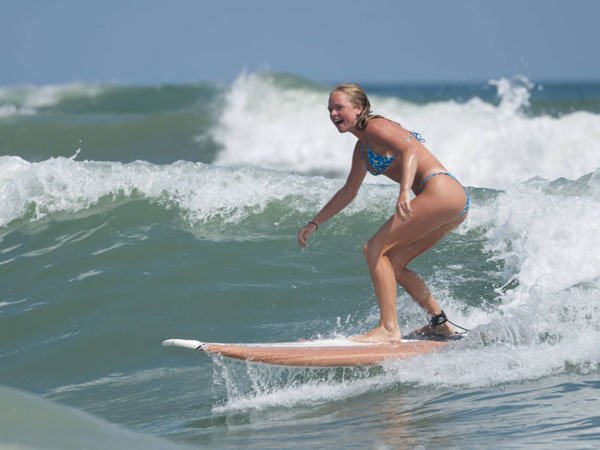 The North Carolina coast has a vibrant history of surfing and surfing competitions. An exact date that surfing began here has not been verified, but juniper surf boards were in use at Wrightsville Beach before 1910. The N.C. Maritime Museum in Beaufort has a surfing display in their permanent collection, and Surf City’s own Ocean Fest has an annual Vintage Surf Contest. Both Holden and Hunter competed in it last year.

Topsail Island Surf School will remain a mobile school this season as it grows, with a physical location on tap for next year.