Topsail Young Life has been standing by area teens when they need it most for nearly 20 years and is now in search of a new leader.

More than ever, young teens are in critical need of moral guidance and mental health management. That’s where the international organization Young Life comes in, serving as the heartbeat of the young generation here in Topsail.

“It’s more than religious, it’s just a relational thing,” says Jen Ball, Young Life’s committee co-chair. “I feel like now, more than ever, kids are just needing those connections, with this COVID world and mental health … We just need each other. So Young Life provides that safe, positive environment for kids to be together and to have caring adults around them for the bigger issues.”

The Christian-based Young Life was founded in 1941 by a young associate pastor, Jim Raybrun, in a small town in Texas.

He took the first step that Young Life continues to walk 70 years later: to show “young people how much God cares about them by showing up in their world and sharing the message of God’s love through Jesus in ways and words they could understand and relate to.”

Today, chapters of Young Life can be found in more than 100 countries around the world, with a total of 2 million young adults that have been reached within their local towns and nearly 350,000 kids involved regularly each week (as of 2018).

Ball says that Young Life has lived in some form at Topsail High School since 2002, with a brief lapse of involvement, followed by a resurgence in 2009. Their most recent area director stepped down, so the group is currently in a rebuilding phase, with Fidel Forde leading the group in the interim.

Young Life, according to Ball, thrives on the tenets of the “Five C’s: Contact, Club, Campaigners, Camp and Committee.” 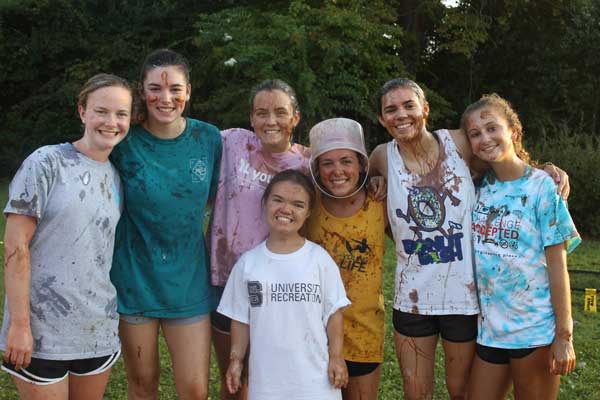 “Contact work is really the foundation of everything we do through our staff and volunteer leaders — usually high school or college-aged young adult leaders that just hang out with kids and go where kids are,” Ball says. “They are earning the right to be heard and show up to sports games, help at the school for tutoring or proctoring. It’s really service-oriented and just going where kids go, rather than having kids come to church.”

Ball describes the Club “C” as a weekly party with a purpose.

“It’s typically full of a lot of energy and, usually, the party will happen in somebody’s backyard,” she says. “For a long time, we had it at one of the fitness centers in Hampstead on a Monday night for the kids to play silly games and sing the songs that are familiar from the radio.”

Ball adds that somebody normally plays guitar and, at the end of club, there is a short devotional.

“When I’ve talked to the kids that have participated in clubs and asked them what their take was, they tell me they enjoy all the fun stuff at the beginning, but most of them talk about those deep talks at the end — that little bit at the end that just speaks to their heart in some way.”

Rounding out the rest of the “C’s” is Campaigners, a smaller group of youth that regularly attend the Young Life Club events and realize they want to learn more about the Bible.

“It’s a time for them to come and just have questions and, if we don’t have the answers, we dig and we all figure it out all together,” Ball says.

Camp by Young Life, according to Ball, does it better than any organization she’s ever experienced. 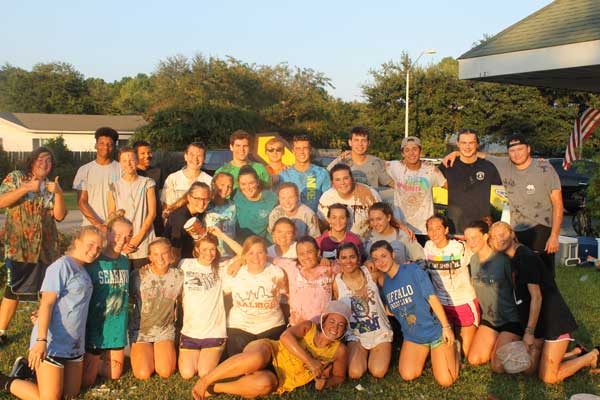 “My first experience with Young Life was going to a family camp in the spring,” she says. “We had just come off of a vacation to Disney World, and I had to talk my kids and my husband into going on a seven-hour drive in North Carolina, get there on Friday night and then leave on Sunday …

“But it happened to be Mother’s Day that weekend,” Ball adds with a laugh. “It’s hard to even describe what it was like, but it was so much fun. I think some of it is the fact that you get away from all the noise. And my kids came away from that — one was in elementary school, the other was in middle school — and just said, ‘Mom, that was way more fun than Disney World.’”

Committee, the fifth C, is comprised of a group of caring adults that support and raise money for the staff leader and college-aged Young Life volunteers working as missionaries, in a way, through the high school and middle school.

“Young Life does an incredible job training people in the art of meeting kids where they are and sharing the hope that we have in Jesus,” Ball says. “I love church, but I think that there’s a lot of kids that wouldn’t necessarily show up to youth group because it’s connected to church. And so, we’ve got that advantage that it’s a fun, safe place to be and maybe the guard drops a little bit.”

Today’s Topsail Young Life, as mentioned before, is rebuilding and actively searching for a new director. Ball says they hope to have regularly scheduled clubs and a virtual banquet up and going in the next couple months.
“The school system is linking arms to be a support system,” she says. “Right now, I’m really optimistic that we’re going to get someone soon. We also have a lot of support from the regional office and a lot of support from all over the place.”

Want to get involved?
To show your support or for more information on volunteering or serving Topsail Young Life in some way, visit topsail.younglife.org/about/