Neither a Trailer nor Trash

The Trailer Bar is one of N.C. most popular coastal dive bars, and it’s not what you think.

Everyone on Topsail Island talks about The Trailer Bar, but what’s the appeal of this place, I wondered. I mean, there are no taps. There are no pint glasses either. If you want your beer poured, you’ll get a plastic cup. And if you want any food, you’ll have to go next door to the Friendly Mart.

I asked my good buddy Nicole Schmidt, owner of the classy craft beer taproom The Crooked Lotus in Sneads Ferry, and she said, “I love, love, love The Trailer Bar!”

That’s when I knew I had to go.

You could be forgiven if you think The Trailer Bar in Topsail Beach is a real trailer. It isn’t. It’s “stick-built,” and it began life as a putt-putt, which a quick glance at the entry will reveal. You could also be forgiven if you anticipate it being a “dump.” It did garner top dive bar honors in N.C. at one time, and there’s something especially appealing to many folks about dive bars. 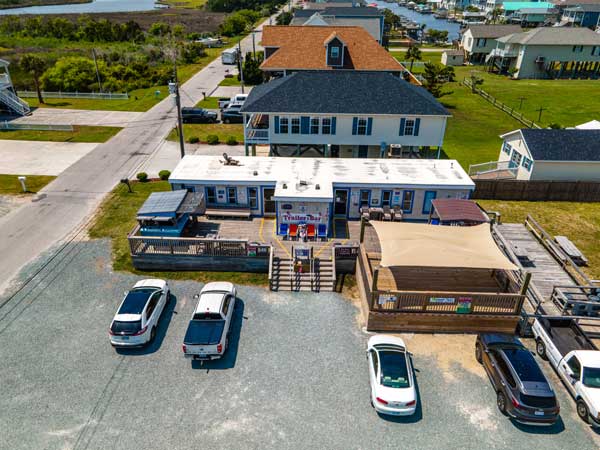 So, on a rainy Thursday afternoon at 2:30, it was just my crew of three that commanded a corner of the small bar. It was empty, and we actually didn’t see the affable bar gal Jan until she came out of the cooler area.

There was a beer list, but naturally, The PubScout’s first question to her was, “How many beers do you have available here?”

“Oh, ah don’t really know, honey,” she answered in her charming Southern accent. “But I do know I just keep filling that dang cooler up like it’s a hungry stomach.”

I didn’t think Dave, Harry and I would be depleting it ourselves on this afternoon, but within 20 minutes the place started to fill up, led by Marilynne and John, and within 40 minutes, there were no seats left at the bar and the tables were almost filled.

“We come down here a few times a year, and any place I rent has to be within walking distance of The Trailer Bar,” said Marilynne, sitting at the bar with her partner, John.

That her last name was Pabst augured well, so I asked her about that regular rental requirement. And that began a conversation that involved beer, motorcycles and wrestling (regarding John’s son, not Marilynne) — three of The PubScout’s favorite subjects. 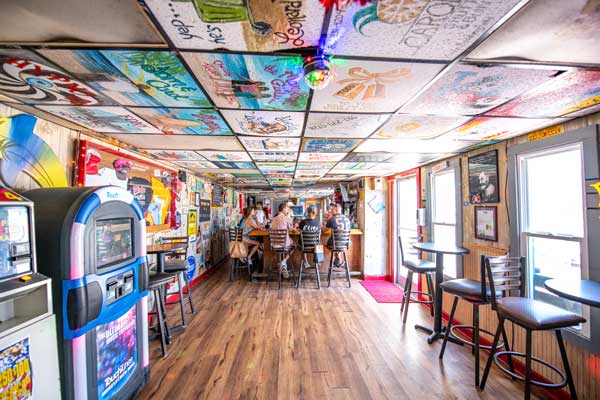 Folks who, we surmised, had never met previously were interacting, conversing, chatting, laughing and taking pictures with each other and just enjoying the place and each other’s company. We sure did. We chatted up two “twenty-somethings,” Carly and Sarah, who were just as friendly as could be. Ditto John at the bar (who’s a friend of mine, though he didn’t get me my drinks for free). Ditto self-described “Fifth Wheel” Melanie and her entire party.

“Why do you come to the Trailer Bar, Melanie?” I inquired.

“Weird sh*t on the walls,” she replied.

It was as good an answer as any, I suppose.

And with some music coming from the jukebox — it’s a dive bar, folks — I took a stroll around to see some of the weird sh*t. The first one I came to said: “Your pants say Yoga, but your butt says McDonald’s.” Not that weird, but dead on the money for a dive bar, I guess.

Then I studied the ceiling. Little murals they all were, some of local businesses, some of sports teams and some dedicated to “Makin’ Bacon,” but all were paid for as a result of owner Tom Trevathan’s desire to re-do the ceiling of the bar he bought 12 years ago with a newer, fresher look.

He hit upon the idea of having an artist do these mini murals to various entities. Those entities would pay a fee — part to go to the artist and the rest to a neighborhood charity, as per Trevathan’s plans.

Carly from Jacksonville was sitting in her favorite spot under her favorite mural of the Pittsburgh Steelers. One business named O’Brien’s had four painted ceiling panels dedicated to its name. There are still some mini-panels for sale along the borders, should anyone be interested. Smaller, they go for just $55, but the same deal — some to the artist, most to charity.

Trevathan himself was not there during my visit, but Jan said he comes in faithfully every day for happy hour. Maybe my crew will go up later next time and get a chance to meet him. Now that we’re official members ($2 a year for this private club), we’ll be warmly greeted, I’m sure.

So will you, if you go, but in the meantime, expect the Trailer Bar to be packed for the season, after having weathered the COVID storm and remaining afloat. Just a block off the beach with some serious outdoor space for music and conviviality in the warm weather, The Trailer Bar will appeal to many visitors who want a bar with a sense of “family.”

Oh, I almost forgot! Have Jan make you a Trailer Trash cocktail. It’s a “secretly guarded” recipe, but it does use orange vodka.

Whether you’re a faithful local or a regular visitor, you’ll find The Trailer Bar an appealing, welcoming place to quaff and socialize. Given the friendly clientele and charming Jan, socializing will not be a problem.