In the famous Stump Sound and waterways beyond, local oyster farmers are contributing to the growing oyster industry in North Carolina.

Oysters grown in Stump Sound are often featured in seafood restaurant menus and have bragging rights for being the tastiest on the Eastern Seaboard. Is that folklore or is there some truth to it?

“It has got to be the salinity of the water and the type of bottom they grow in,” he adds. “They are a real fat oyster, and they have a unique taste. I’ll put Stump Sound oysters up against any oysters growing in the United States. I’ve eaten oysters out of Texas, out of Maryland and Virginia, they just can’t compete with these Stump Sound oysters.”

Huie says the good reputation for Stump Sound oysters probably dates back to the 1950s and ’60s, from Davis Oyster House at Tar Landin (now defunct). Another local oyster house, Grant’s Oyster House in Snead’s Ferry, has been selling them, with a host of other seafood, since 1939.

When the temperature drops, the oysters start to fatten up, Huie says. “The outside will be as big as your hand, and inside they look creamy. They look like a stick of butter in there.”

Huie has put his oyster tongs aside to work the last year and a half for the state in cleaning up hurricane debris. The N.C. Coastal Federation tried to hire fishermen for the clean-up to help them out following crop losses after Hurricane Florence.

“We had 20 to 40 inches of rain here, and the river was closed after Florence,” Huie says. “I used to have a clam house open, but 80 to 90 percent of our clams died here in New River on account of the storm, because there was so much rain water. It hurt the oysters too, but they survived better than the clams.”

He says there has never been a cleanup like this before. “We’re picking stuff up from Fran and Bertha from back in the late ’90s off these barrier islands,” he says. He estimates that so far, the clean-up crew has hand removed more than 224 tons of debris, most of it hidden in the woods of barrier islands.

He has noticed while cleaning this summer that the wild oysters seem to be making a strong comeback, and says the season, which runs about October 15 through March 31, looks to be a good one.

Anyone wanting to try their hand at tonging some wild oysters is free to do so. Any non-licensed fishermen are allowed a bushel of oysters per day for personal use. 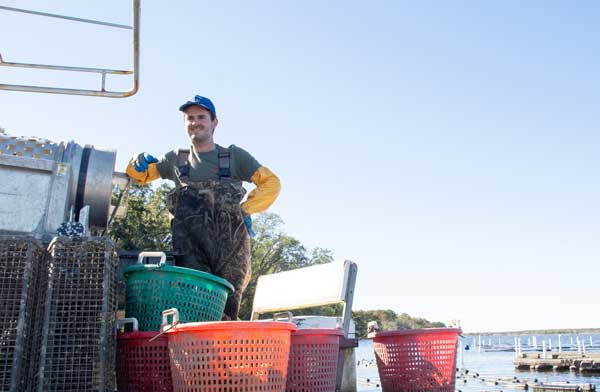 Farming is Farming
The oyster farming industry has a lot of similarities to dirt farming, and a lot of the terminology is similar with seed (1/4 inch or less sized baby oysters) and grow out (raise to maturity) as examples.

“People have this idyllic view of what we do, that we swim around in the water taking care of oysters, but it is a lot of hard work,” says Evan Gadow of Three Little Spats Oyster Company.

The Gadows have a big farm on both sides of Permuda Island. They have close to two million oysters in their waters.

“Most oyster farmers have 5 acres of water they lease from the state; we have over 63 acres,” he explains. “And like having more land, with more water you have to manage it properly to be able to grow.”

Aquaculture farmers have to meet a certain quota to retain leases, and the state rules are stringent.

“Whenever you harvest any form of shellfish, you have to fill out trip tickets, which adds a paper trail of harvesting and selling,” Gadow says. “If you are leasing, it shows you are hitting your quota. It’s also used for tracking wild oysters, to see how a certain area is producing.”

The length of time for growing out oysters varies. One batch of seed could take three or four months, another could take three 3 years. “It’s genetics, where you got ’em,” Gadow says with a laugh. “Some oysters are just slower than others. Unfortunately.”

Matt Schwab of Hold Fast Oysters explains the culling process and the hibernation of the oysters: “With the extended N.C. growing season, we get a large chunk of our crop being ready in about 10 months. In Nova Scotia, Canada, it can take almost two years to get to harvest size. Because of the water temperatures.

“Oysters are density dependent,” Schwab continues. “When we get them, we get them at about ¼ inch, or a little smaller, we’ll put 5,000 seed in a cage. By the time they are 3-inch harvest size, there are about 800 in a cage.  As they grow, you are constantly sorting them by size and working them.”

Oysters hibernate in the winter, and their growth slows down, but they aren’t dead. “They are pretty much the only animal product people eat that is still alive,” Schwab says. “Some people don’t want to think of it that way, but technically they are hibernating, which is why in wintertime, growth really slows down.”

“My farm is in Stone’s Bay near Camp Legume rifle range,” he says. “I love my growing area, the New River, it’s very unique. I have the opinion that Stump Sound is slightly overrated. But there are a lot of oyster farms in that region right now and they work very hard.”

The Season and the R month Myth
There’s a difference between wild harvested and farmed oysters. The wild oysters are limited to the October through March or April time frame, but the farmed are not.

“Farmed oysters don’t reproduce the same way wild oysters do, so we can harvest year-round,” Schwab says. “We sell all summer, year-round, 24/7/365.”

The myth that you shouldn’t eat oysters in months that don’t end in R or in the summertime goes back to wild oysters. “They reproduce in summer, and to limit the impact on the wild stock, the state would not allow harvesting in summer, so the oysters had a chance to replenish,” Schwab explains.

He says that is why the wild summer oysters are so watery, because all their energy is going into reproduction. “Whereas the farm-raised are genetically sterile,” he says. “They don’t reproduce, so all they do is eat and grow. In the summertime they just as full and meaty as they are in the winter.”

However, the flavor of the farmed oysters does change with the season. “They are filter feeders and they eat phytoplankton, green algae,” Schwab says. “Seasonally that changes, and that’s how oysters get their flavor. It can change a lot summer to winter.”

People not wanting to eat oysters in summer is a problem for oyster farmers.

“That’s the bane of our industry, that people think they’re unsafe to eat in the summer,” Schwab says. “It is very rare for someone to get sick, but it could happen any time of the year, if you pull an oyster out in the winter and leave it out of water.” 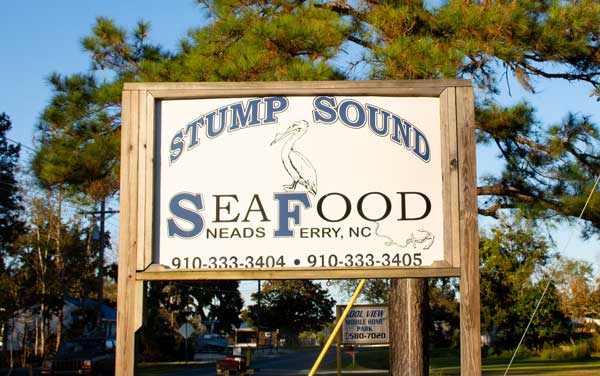 “N.C. is the Napa Valley of Oysters”
We’re not sure who made that comparison first, but the launching of the N.C. Oyster Trail is working to make it a reality. In May 2018 three N.C. senators sponsored a bill to encourage the growth of the oyster industry. The co-statement by senators Norm Sanderson, Bill Cook and Harry Brown said, “Our goal is for North Carolina to become the ‘Napa Valley’ of oysters and to become a $100 million industry in 10 years.”

Three Little Spats Oyster Company farm is one of the initial 10 farm members listed on the N.C. Oyster Trail site (ncoysters.org), a combined project of the N.C. Coastal Federation, Sea Grant and the Shellfish Association.

“The Oyster Trail has put some of the bigger farms on the website,” Gadow says. “You can book tours and buy oysters up and down the coast. It’s kind of like how Napa Valley has their wine tours, we have an oyster tour. They just started a website. There are just a few farms on there right now, and we’re one of the first. It is a huge deal for all of us.”

Touring the farms on the N.C. Oyster Trail, consumers will get an idea of the variation of oysters throughout the state.

“North Carolina has so many different aquatic coastal ecosystems,” Gadow explains. “An oyster gets its flavor from the water. Sound oysters have that nice balance between the taste of salty, buttery and fat. That balance is why people love Stump Sound oysters so much … All up and down the coast there are so many combinations of fresh and salt water. If you think of it, Pamlico estuaries are completely different from what we have down here and different from what you have in Morehead.”

The Three Little Spats farm has already had a couple of visitors enjoying the Oyster Trail.

The Oyster Trail could be an eco-tourism boon for coastal towns, at least as far as seafood sales go. Another plus for the state is the clean-up work the little bivalve mollusks do themselves.

“Oyster farming is the most environmentally friendly form of farming and producing food,” Gadow says. “It has a net positive effect on the environment. A full-grown adult oyster filters 50 gallons of water a day. It takes crap out of the water and turns it into something useful.”

Gadow is quick to recognize the work of fisherman Lena Ritter for the work she did to preserve the Permuda Nature Reserve, where he works, and saving it from the hands of developers. “She was a very staunch supporter of saving the water quality of the island,” he says. “She was a hero.”

If you’d like to know more about oysters in North Carolina, including the farms, farmers and Oyster Trail, visit ncoysters.org. 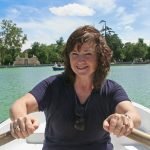