Lines in the Sand

I am getting old and maybe boring, but a good day at Topsail Beach is now spent browsing shells left by the outgoing tide. Sure, I still swim with my kids, body surf, feel the pull of the currents, consider the endless horizon, share a brew or two with my wife, but the shells are the real draw — running my hands over drifts of shells, seeing what’s under the top layer, pulling up and examining fistfuls and letting the next wave free the mix from my grip and send it spiraling back through the water to resettle, only to get tumbled again instantly, in a perpetual tidal cyclone.

As the tide moves out, the shells are beached and finally still. They lay there under the relentless sun as people amble along, surveying the days offerings, picking up some things, passing over others like useless clutter. I wonder what these other combers are keeping, what makes the cut and gets displayed back in dusty little curios inside their landlocked houses. A giant shark’s tooth set beside the purple scallop shell, the broken sand dollar, a finger of coral that was once part of a living acre, smooth polished rocks of infinite size and color that were seemingly left in the drying sand by beach sprites. 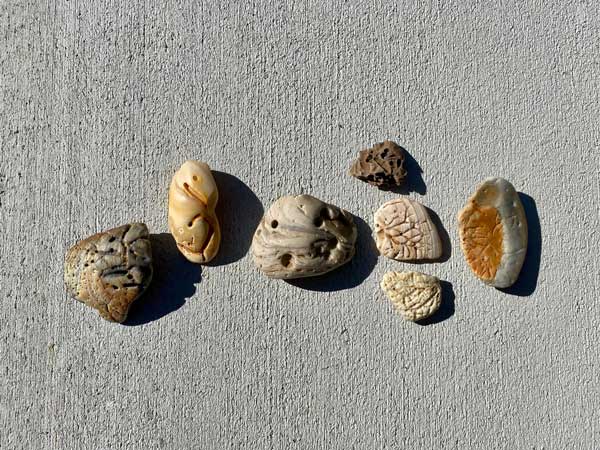 Many fragments and the dull and monochromatic are picked up and deemed not quite pretty or interesting enough, so they’re discarded, or hurled back into the ocean to be scoured by salt and sand, again and again, until, years and years later, each piece is ground into grit or becomes just beautiful enough to be kept.

Our tidal treasures are collected in a faded, toddler’s Scooby-Doo tackle box on the beach, brought home and rinsed, and preserved in various glass jars on the fireplace mantel or in small heaps on tabletops as casual decor and a reminder of the natural. Occasionally, I’ll pull out what we’ve amassed over the years and sort it into like piles and examine the fine details and textures with the magnifying glass.

There are shell fragments with holes from odd snails that burrowed into them when they were complete and seemingly secure mini-fortresses, ate the blob creature inside and pulled back out, leaving perfectly symmetrical circles, arrayed in fantastic patterns. Other pieces have strange, seemingly intentional, etchings— grooves and runs of unknown origin that turned these impossibly hard surfaces into porous drawing pads. 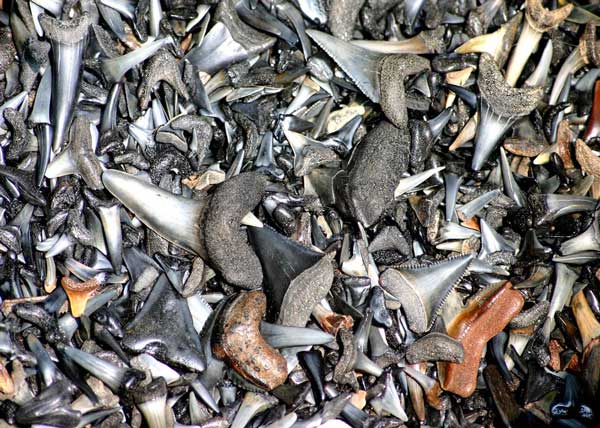 I’m starting to think that these designs and crude symbols are some kind of message. So I look for the right ones, in the right pattern, scan for more code in what other browsers discard every time I wander the tide line, try to parse it out and analyze it back home when I inspect my new pieces and muse over the random marks that defy randomness. It’s like I’ve received these notes from the sea — maybe it’s a section of the reply, a mere phrase, to the messages in bottles that we’ve been chucking into the water for centuries.

There are other collectors out there with the shells that I’m missing, the ones with the coded etchings that would complete the message. We all have incomplete sets and can only figure this out by coming together and finding a way to share the odd clues that we’ve picked up and decided to keep.

Until then, the code remains unbroken and the ocean’s response will have gone out to everyone and to no one, an empty query, like sound waves through space seeking a receiver.