Help on the Half Shell

It’s always oyster season at Shuckin’ Shack Oyster Bar in Surf City, where their Oyster Recycling Program thrives at the core of the restaurant’s sustainable mindset.

Since the first day Shuckin’ Shack Oyster Bar opened in 2015, they’ve been committed to protecting the local oceans, waterways and marine life. The Surf City location is one of more than a dozen locations throughout the Southeast, and all are certified Ocean Friendly Establishments in collaboration with the Plastic Ocean Project and Surfrider Foundation. In Surf City, they partner with the North Carolina Coastal Federation (NCCF) to recycle all of their shucked oyster shells.

“They’re then made into artificial reefs and returned to the water,” says Beverly Simas, who independently co-owns and operates the location with her husband, Jason. “The oysters need to land on other oyster shells to make more oysters and propagate more marine life. More oysters help with improving water quality.” 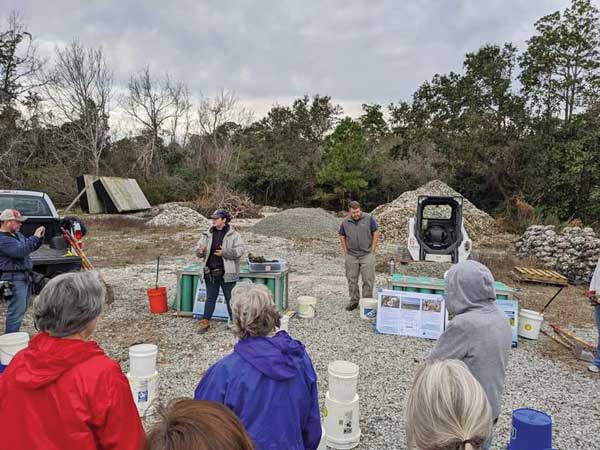 Reef building with recycled oyster shells is so vital to water quality that in North Carolina it’s actually illegal to dispose of oyster shells in landfills or to use them in landscaping. Simas reports that since 2015, Shuckin’ Shack in Surf City has recycled an average of a quarter million single oyster shells, or 1,500 bushels, each year.

“Our business is based on quality, local seafood, so we want to keep the source of the seafood healthy,” she says. “Oysters are the number one way to keep waterways healthy. With the amount of oysters we go through, recycling the shells is definitely an obvious choice to help sustain our waterways.”

In the southeast region of North Carolina, Shuckin’ Shack is one of a handful of restaurants in the area recycling shells on their own before volunteers from the NCCF come to bag them and haul them away.

“All of our tables have holes in the middle to hold the buckets for everyone’s oyster shells, then they go right to the recycling cans,” Simas explains. “We collect them, our staff drives the cans to a lot where the shells are laid out in the sun to dry out, then eventually, the Coastal Federation comes in with a group of volunteers and puts them back in the natural world.”

Here are just a couple of reasons for recycling oyster shells:

They clean the water. Oysters are natural filter feeders, pumping water through their gills and trapping food, nutrients, sediments and chemical contaminants in their bivalves. One oyster can filter more than 50 gallons of water per day for underwater grasses and marine life.
They provide food and habitat. An oyster’s lifespan involves babies settling on top of adult oysters, which forms layers and layers of oysters. And, with all of their shell crevices, oyster reefs give a safe haven to hundreds of small fish and invertebrates.
They impact the economy. The oyster industry, since the late 19th century, has contributed millions of dollars to the region’s economy by way of harvesting, selling, shucking, packing and shipping. 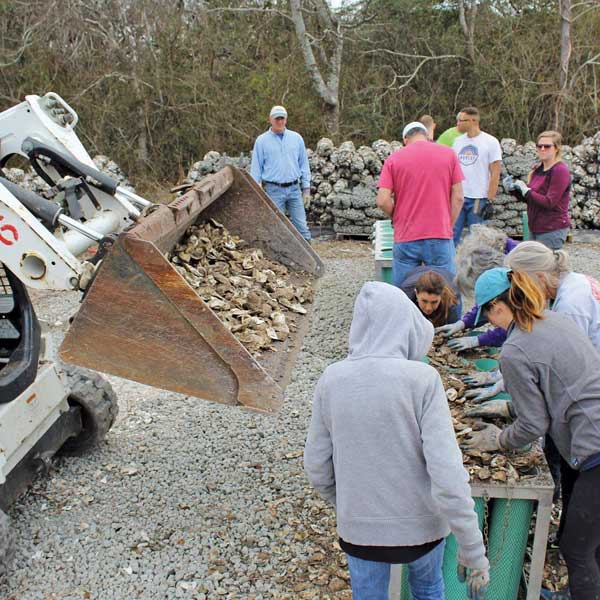 In January 2017 NCCF launched its 50 Million Oyster Initiative, a three-year project to restore 50 million oysters that will filter 2.5 billion gallons in the waters of North Carolina every day. The benefits of this initiative and the construction of the reefs are plentiful, both short- and long-term: creation of jobs for contractors, fishermen, construction workers, truck drivers and more; improvement of the fish habitat and water quality; and enhancement of the tourism industry and coastal environment for the future. To date, nearly 41 acres (or 41 million oysters) of oyster reefs have been built throughout the state’s shell-fishing waters, including the Senator John Preston Oyster Sanctuary and shoreline projects in the Cape River, Pamlico Sound, Carolina Beach State Park, Wanchese Marine Industrial Park and more.

To heighten the success of the cause, NCCF is currently working on teaming up with local governments and businesses to provide more public oyster shell drop-off and recycling sites. The federation also has some shell recycling barrels available for loan for large, local oyster roasts. Last year, the organization ramped up oyster shell recycling education to increase community awareness.

Be a Part of the Solution
To help the cause, be sure to recycle your oyster shells from home roasts at area recycling sites or volunteer with NCCF’s oyster reef restoration efforts; more information is available at nccoast.org.

You can also help by dining at establishments that recycle their oyster shells. Shuckin’ Shack Oyster Bar is at 13460 N.C. Highway 50 #101 in Surf City. Learn more about their sustainability efforts at theshuckinshack.com/sustainability.