The Corner, a new craft beer-focused restaurant in the old Hopsail Island location in Surf City, is gaining in popularity after a rocky start amidst the pandemic.

“A hero will rise.” So went the trailer for the blockbuster movie Gladiator. The Ridley Scott classic, released in April 2000, still appeals to millions of movie fans. But this story is not a movie review. It is, rather, the story of a building’s rebirth and the pluck and drive of two young heroines with the vision and energy to take a plunge into cloudy waters, waters that got even cloudier — if not downright muddy — when COVID-19 showed up.

The building in question once housed a neat craft beer bar and bottle shop called Hopsail Island, which closed its doors in January. They were not closed for long, as Jane-of-all-trades Roxy Treweek and entrepreneur Clarissa Grant saw an opportunity for a craft beer place that served food and began their journey in that very same month. 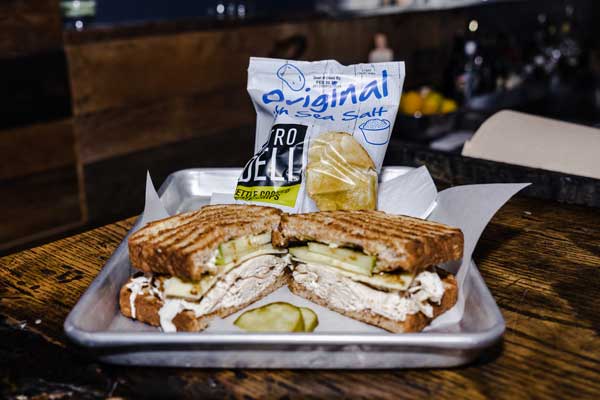 They changed the vision and the name of the place to simply The Corner, and the move is paying off. With a food menu that has won raves from owners of other businesses on the island and a maintenance of those craft beer offerings, Treweek is watching business grow.

The bar was practically full at 4 pm when Dave and I rolled in, which is pretty impressive because on Mondays The Corner doesn’t even open until 4 pm. So somebody — the locals, likely — knows something.

We found out that one of the reasons is the sandwiches The Corner offers along with that craft beer. Treweek shared that every Signature Sammie is named for a ’90s hip hop artist, and her recommendation to us was the Notorious ITL.

I never listened to the work of its namesake, but if it was as good as this Notorious ITL, he must have won awards for something. Dave and I split one, then ordered a Hot Ham and Swiss that was equally good. Both had a special Corner sauce that helped to make the sandwiches special.

In addition to the 15 craft beers on tap, The Corner prides itself on its Boozy Milkshakes, frozen drinks and Classic Cocktails, all the brainchildren of Treweek, a former Classic Cocktail bartender with 10 years of experience. The UNCW undergrad/Webster University grad also does digital marketing for startup companies. She and Grant decided to have food in their place because they understood that it’s hard to attract business without it. 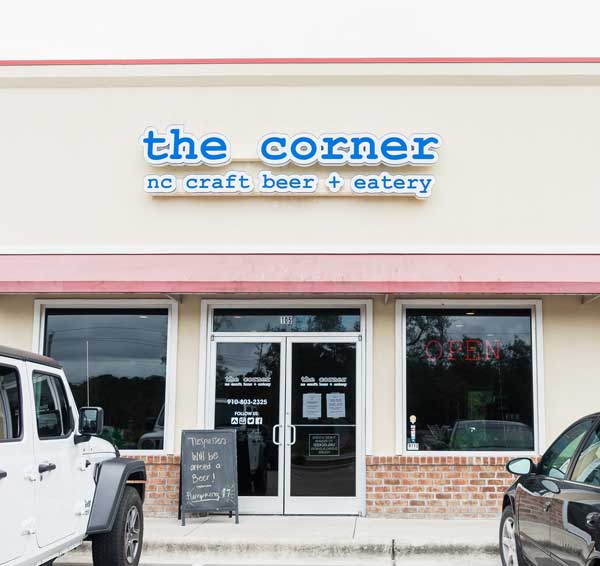 Their tap offerings vary from stout to cider to fruited gose, and many solid N.C. breweries are on their beer menu. It was good to see OIB’s own Makai Brewing represented, too.

Apart from the variety of the beer, the quality of the food and the size of the 4 pm crowd, what impressed this writer most was Treweek’s unquenchable enthusiasm for her vision. The sparkle in her eye and the excitement in her voice when discussing her plans and dreams — both hallmarks of successful businessfolk — was unmistakable. The Corner has a very usable outdoor section that in more comfortable weather will see lots of visitors, and she would love to expand the kitchen. “But we have to generate what we can with what we have for now,” she says.

I’m waiting for Treweek to come up with another Signature Sammie, a sandwich named the Maximus. You remember: My name is Maximus Decimus Meridius, commander of the Armies of the North, General of the Felix Legions, loyal servant to the true emperor, Marcus Aurelius. Father to a murdered son, husband to a murdered wife. And I will have my vengeance, in this life or the next.

Sounds like a great hero sandwich to me. And a hero will rise.