In the Four Corners area of Sneads Ferry, a collective of powerhouse women supports each other while growing their individual businesses.

Among the many women-owned businesses in the Sneads Ferry community, there are five women who have launched and are successfully operating businesses in the Four Corners area. These women support and mentor each other, and generally focus on community instead of competition.

Jennifer Vanek, owner of Harper Rose Boutique, says the business owners “celebrate the fact that we survived” the pandemic. Vanek launched her business in September 2018 on a whim, she says. She began, with her sister, by selling children’s clothing from her home. She branched out to promote her offerings on Facebook live and then with events from a mobile trailer.

Vanek found that she was shipping items non-stop and “couldn’t house all the inventory we had on hand.” About ten months after she opened the business, she started selling what she calls “mom clothing” in response to customers’ requests. Harper Rose Boutique expanded to a storefront in Wilmington that had to be closed when COVID hit. Vanek says she jumped on the new Sneads Ferry location, as she had lived in the area for many years and “needed our home hub to be here.” 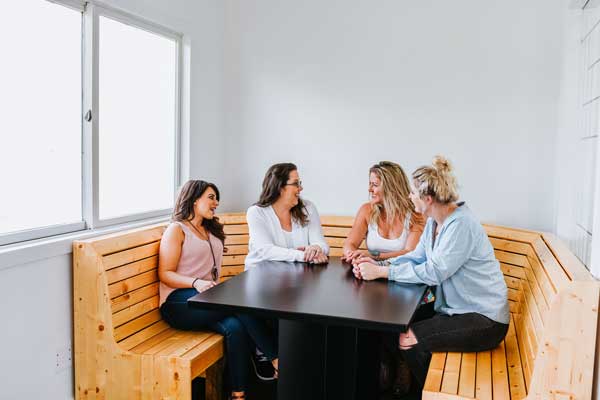 “Ever since I’ve had this business, it’s been nothing but support from other small business owners,” Vanek says of the Sneads Ferry location.

Vanek mentored another businesswoman, Marilyn Didomenico, who launched Grit + Grace Bazaar during the pandemic. Didomenico says the bazaar “started off as an idea to sell Christian-related items.” After going through a challenging time in her life, she says she “had to figure out what I wanted to do when I grew up.” She wanted more than just a job and decided to create a shop of things she loved. The name of her business has significant meaning, as it’s about constantly finding your strength within and “the grace that God gives us.”

The idea of the bazaar came from the hodgepodge of different things in the shop. There are local items and those from other parts of North Carolina, including candles and t-shirts made locally, soaps made in nearby Dublin and natural dog treats made in Jacksonville. Grit + Grace Bazaar also hosts monthly vendor events as well as mini markets during the week, giving other people an opportunity to sell their products.

Didomenico says the camaraderie between the local women-owned businesses “gives us the grit to persevere.”

“We aren’t competitive with each other,” she says. “We come together.”

Just down the road from Grit + Grace is Salty Sistas Food Truck and Eatery, owned and operated by Jeanette Georgitis, who had run a soup kitchen and food pantry previously. Still committed to giving back, she wanted a different pace when she launched her business. Having lived in Sneads Ferry for a long time, she still wanted to “be a part of the community and help out where needed.”

Salty Sistas started as a food truck in 2019 and, from the beginning, has donated to local charities from the proceeds. Georgitis opened her current location as a dine-in eatery, enabling her to donate trays of food to those in need. During COVID, she promoted a buy a meal, donate a meal program to help others in need. 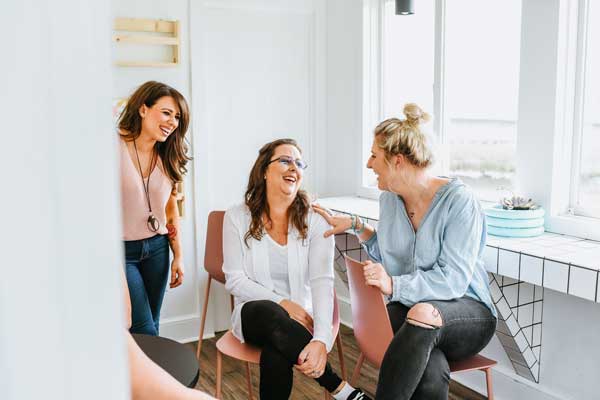 “I don’t believe you can get anywhere in life unless you’re giving first,” she says.

The Salty Sistas menu offers a mix of seafood, including Maine lobster and local shrimp, and a range of other options, such as Philly cheesesteak, so “everybody in the family can find something they love,” Georgitis says. The restaurant still operates food trucks and, in fact, is expanding with a wood-fired pizza truck soon.

“I’ve always wanted to do something where I could cook, support myself and give back,” Georgitis says.

She is proud of her success and of the success of other women-owned businesses in the area.
“Women are just becoming more empowered, coming out of their comfort zone,” she says. “They are realizing, ‘I can do this.’”

Across the street from Salty Sistas is Katie Rochelle’s new venture, Coffee Haven. The drive-through and walk-up coffee shop opened in January 2020. Rochelle worked for another coffee shop owner the previous year, just one month before that owner decided to sell the business.

“I fell in love with the art of making coffee and the community,” she says.

When the opportunity presented itself, she bought the business, renaming and rebranding it. Coffee Haven offers a range of coffee drinks as well as teas, smoothies, specialty drinks and seasonal drinks.

Rochelle partners with the Salty Sistas frequently, which provides baked goods for her customers. Even with the challenges of the pandemic, including challenges with getting milk, she hasn’t regretted a moment of it.

Rochelle says that Sneads Ferry and Topsail were like a second home to her growing up in Jacksonville, adding that the area “always had a special place in my heart.” She is also big on giving back to the community and has placed a Blessing Box outside Coffee Haven. The box is a “take what they need, leave what they can” opportunity for people who need, or want to donate, food and health items. She is encouraged that the Blessing Box is being used quite a bit now.

“Everyone in the area is very supportive,” Rochelle says. “They lean on each other, promoting each other.”

Around the corner from Coffee Haven is The Float Spa, launched by Beth Jones in 2016. Jones admits starting her business was “quite a project.” She had wanted to build it years earlier, but state regulations were challenging for float centers, treating them like commercial swimming pools. She was instrumental in getting those regulations changed.

Flotation therapy is also known as sensory deprivation therapy. Clients enjoy a sensory neutral environment, resting comfortably in 10 inches of water inside a capsule that “looks like a big dinosaur egg.” Epsom salts heated to skin temperature help you relax, giving “your body and mind the space they need.” Jones emphasizes that it’s a great therapy for chronic pain, which is one of the reasons she launched her business. 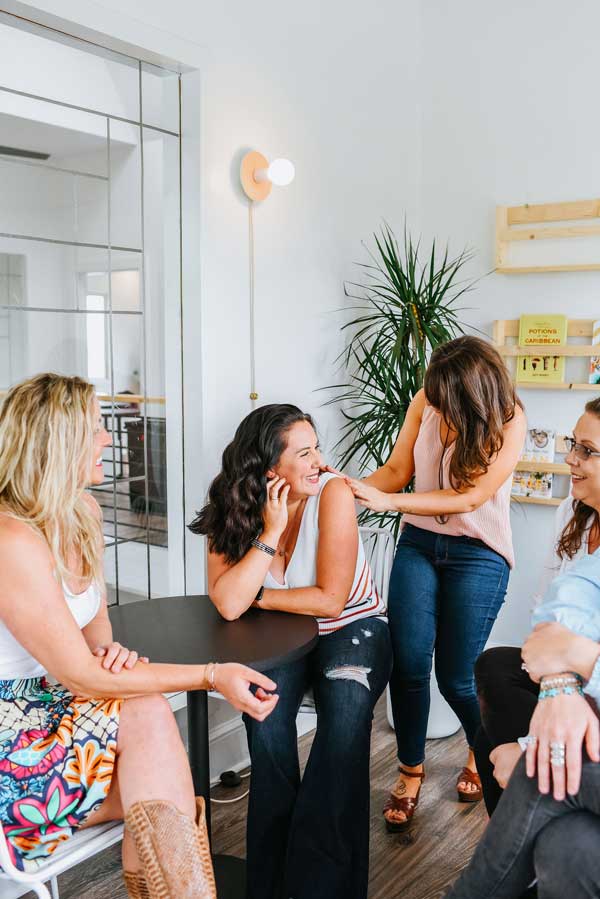 The Float Spa offers many mental health benefits as it helps people reduce their stress and anxiety, including PTSD experienced by many military personnel in the area. In fact, Jones started the business after a visit to a similar facility operated by a friend who was a Navy SEAL in Virginia Beach.

Jones says her own business has “weathered four hurricanes and a global pandemic.” Changing some of the sanitization procedures, she says that she felt “super confident” when they re-opened after the COVID shutdown. Jones has not only survived the pandemic, but is now expanding through franchising. She owns another float spa in Charlotte and franchised the company about a year and a half ago. She is also president of the Flotation Tank Association.

Summing up the similar success enjoyed by so many other women-owned businesses in the area, Jones says, “There are so many powerhouse women in the community.”

These women are growing successful businesses and supporting and encouraging each other along the way — and in the process building a strong business community.