A Tale of a Trail

Maureen McKenna’s Sunday rides to church have garnered quite a following.

This is the story of Maureen and Shane, who met and began their friendship on Maureen’s 40th birthday in Long Island, New York.

“Shane is my beloved Belgian draft cross quarter horse,” Maureen “Moe” McKenna says, “and he’s just a lovable, big horse. He has turned out to be Shane, the wonder horse.”

Before moving to Burgaw, McKenna and Shane were members of the Spirit of Long Island mounted drill team for 14 years. It was a team of 24 horse-and-riders strong that would perform a synchronized ride or routine to the tune of patriotic music. Riders donned costumes of red, white and blue and black cowboy hats; horses were dressed in military style.

“We traveled up and down the East Coast doing parades and military events and visiting veterans’ homes, where people came out in wheelchairs and met the horses,” McKenna says. “So, Shane became a wonderful horse through doing all that, and having that training behind him gave him the background of being a really well-mannered bombproof, as we call it in horse terms.”

Shane also stayed by McKenna’s side when she became a teacher at the Gersh Academy for Students on the Autism Spectrum.

“He came to school with me, and we worked with teenage young men on how to be empowered around a large animal,” she says, “and how to control themselves in a social situation, how to walk into the corral and have low energy and self-control.”

Flashforward to 2013, when McKenna and her husband, with Shane in tow, migrated to North Carolina. By that time, Shane was already approaching 30 (way into his nineties in human years), but extremely healthy. And now he has evolved into a trail horse.

The McKennas built a house across the street from Piney Woods Farm, and when they bought the land, made sure McKenna could ride Shane over their land.

“I had no idea how beautiful this place was,” she says. “It’s heaven over there for anybody with horses. So, I started riding over there as much as I could.”

Which led to her next journey: exploring a church to attend here in the South. It was on her usual 45-minute ride on Sundays through the farm to Highway 53, where she discovered a cute little church on the corner.

“I said to myself, ‘Wow, wouldn’t it be cool if I could ride my horse to church?’” says McKenna.

And the folks at Westview United Methodist have been welcoming McKenna and Shane ever since, with Shane patiently waiting outside the church, tied to a tree.

“When I come out of church, a lot of the kids that go to the church bring him apples and peppermint,” she says with a laugh, “so he’s really become a celebrity at my church.”

Shane has also become a star on Facebook, as McKenna posts videos on her page that follow her Sunday rides to church — and she’s gained quite the traction.

“People really enjoy it because the way I videotape it, it’s right through my horse’s ears, so you actually see what I see,” McKenna says. “I describe nature and I describe the type of day it is, and what’s growing in the fields and the cows that I see and different things I come across on the path … I take a picture of a butterfly or a bird. … So it’s become a nature thing. And you hear the squeak of the saddle, you hear the horse’s footsteps, and people just love it because it’s like they’re riding the horse, too.

“It’s also wonderful because so many of my team riders have lost their horses over the years,” she continues, “so now all those people that I’ve ridden with have their horses at the end of their lives, and it means so much to them to be able to take a ride on Shane through the video virtually.” 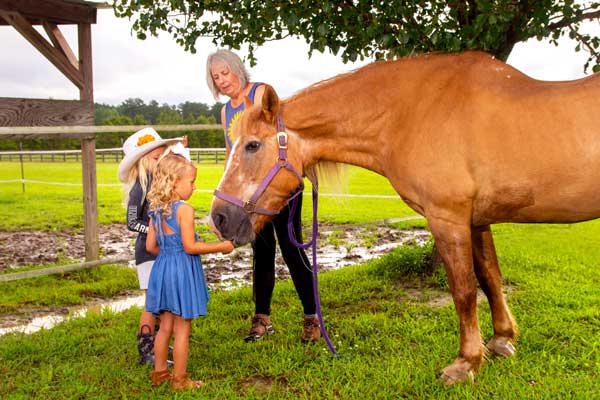 McKenna and Shane celebrated Shane’s 36th birthday on May 15 with a ride on the beach in Little River with a herd of friends.

“I felt like this was his last hurrah,” she says. “Who knows how many more beach days I’m going to get with him? We just had the most wonderful day at the beach. He wanted to be the lead horse and walked in the water and showed all the horses that were looking for self-confidence, showing them all it was OK.”

In fact, the McKennas are looking to possibly move from Burgaw to the beach in Surf City, now that Shane is aging and McKenna’s riding career is coming to an end. The couple is looking to sell their house that sits on 5.5 acres with a stall that can accommodate four houses on the property.

“I’m kind of hoping somebody moves in that might let him stay here or that a neighbor might take him because I kind of want him to stay where he is,” McKenna says. “He’s so comfortable with his surroundings, but if we find a place close to where we’re living, I may consider moving him there.

“I’m keeping my fingers crossed that it all lines up well,” she continues. “He’s still going to be very much a part of my life.”