The 51st Sneads Ferry Shrimp Festival will be held October 21 and 22, 2022, on the grounds of the Community Center in the heart of the growing fishing village.

Jonathan Koziol, newly appointed Shrimp Festival chair, says that when the festival started, “it was just a bunch of the shrimp boat captains and fisheries that wanted to get together and have an event for the community.” He estimates that attendance at the two-day festival last year was around 15,000.

There have been many changes to the event over the past 50 years, but one constant remains a significant part of the event. Bernice Guthrie, the official historian of the Shrimp Festival, has attended all but one of the festivals since 1971 and is still an active part of the planning committee. 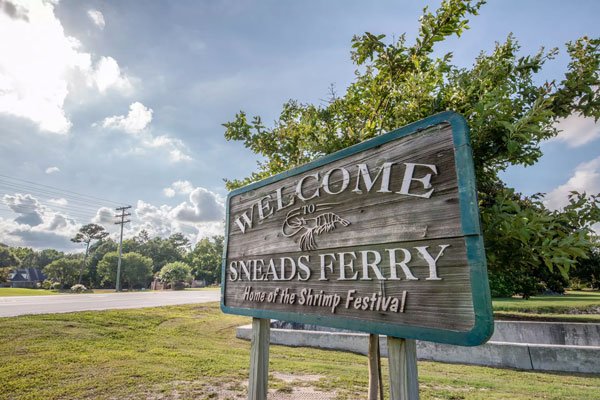 Volunteers like Guthrie run the festival, and the committee starts planning for the next year’s activities as soon as the current year’s festival is complete. Koziol, who has been volunteering for eight years, says it’s “never ending.”

“Once we conclude the festival, we have a meeting once a month and we start planning for the next year,” he says.

“Now we have a place where the community can get together and have this festival every year,” Koziol says.

At one point the decision was made to put up pavilions for shade from the hot August sun. As the festival became more popular, the Shrimp Festival committee decided they needed a building to have a place where people could sit down and relax.

The building also provided a place to cook shrimp for the Shrimperoo held each evening. Festival goers can enjoy a “plate of Southern goodness,” as Koziol describes it. The meal typically includes a plate of fresh fried or boiled shrimp with slaw, fries and hush puppies. The shrimp is always fresh and always local.

Additional activities around the event include the Shrimp Ball, held one week before the Shrimp Festival. The ball is held primarily to recognize a voted shrimp boat captain of the year and serves to kick off the events. At the festival itself, a beer tent and local winery are featured. There’s a touch tank that allows everyone to interact and ask questions of the local fish houses. 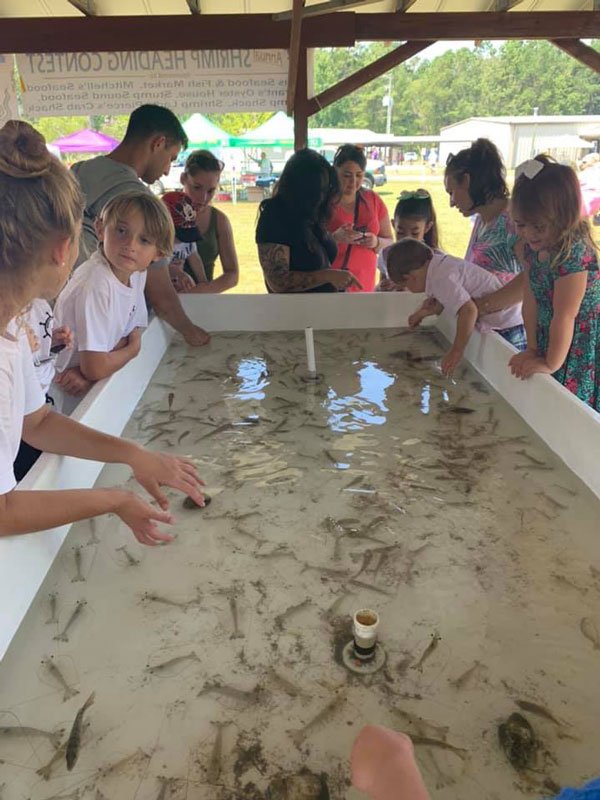 Maintaining a sense of history and local knowledge is important to the festival. A boat captain brings fishing nets to display, so that participants can see them up close and learn more about how shrimping works in this community. The proceeds from the festival also help fund a scholarship program put on by the Community Council.

For years the Shrimp Festival was held in August. In 2020 the festival was not held due to COVID, and in 2021 the planning committee moved the event to October. As Koziol explains, they spoke with the captains and the fish houses when considering the schedule change. They were told that the shrimp are “not really running in August.” That, coupled with the weather issues of the past August events, including one weekend during which it stormed constantly, convinced them to move the festival to the fall.

The captains concurred, saying that in October “they would be just finishing up bringing in shrimp from Pamlico Sound,” Koziol says.

Another change was to reduce the festival to Friday and Saturday, from its previous three-day schedule. The festival was moved to the third weekend in October and will be held on the 21 and 22 in 2022.

Koziol first started volunteering with the Shrimp Festival when he was an instructor at the local training center for Marine combat engineers. He retired from the Marine Corps two years ago. He says that while he was there, the shrimp festival committee reached out to the Marine engineer school. When the volunteer opportunity came up, Koziol stepped forward and has been doing it ever since. He has also brought in other Marines to help with the festival. In 2019 Koziol was nominated and honored as the Volunteer of the Year.

Beyond the volunteer planning committee, there are many individuals and groups from the community that participate in making sure the Shrimp Festival is a success each year.

There is a lot of involvement from churches, community service organizations, businesses and the fire department. Koziol says the Turkey Creek Volunteer Fire Department is “very intertwined with the festival.” They help with traffic, provide medical services during the festival and participate in the parade.

The Shrimp Festival parade will be held Saturday morning, October 22. The parade features the 2nd Marine Division Band, the Dixon High School marching band, car clubs, a variety of floats and current and past Shrimp Festival Kings and Queens. A lot of local businesses will sponsor the cars that carry the kings and queens. A car show will also return to the festival in 2022.

In Sneads Ferry, the Shrimp Festival is a time for fun, history and some amazing food.