Steve Holland explains the origins of the legendary Holland’s Shelter Creek II Restaurant and how it came to be in a new location.

If you have some time on your hands and are interested in learning more about the development and history of Pender County, I have the perfect man for you to talk to. Whether you choose to sit inside or out at his new restaurant, Holland’s Shelter Creek II, on Highway 50 in Holly Ridge, former Pender County Commissioner Steve Holland will supply stories dating back to his youth in the 1950s. I sat down recently with Holland and the restaurant’s co-owners, Mike and Annette Barnes, to hear how this backwoods restaurant up on Holly Shelter Creek recently came to be in a new location.

Holland was born in Burgaw on Halloween in 1947. “I was actually delivered by my grandma,” he says. He lived in Yamacraw (yes, I had to look that place up!) as a child and went to Longcreek School. Growing up in farm country, he worked for the local farmers picking blueberries, strawberries and other crops. “In our spare time us kids would hunt and fish every chance we got,” he says. 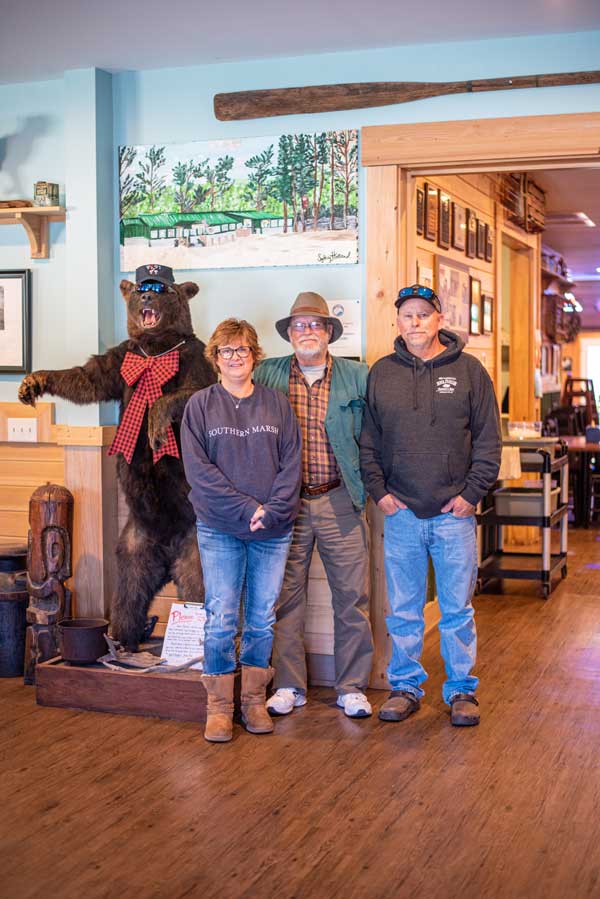 When Holland was 12 years old, his father got a job in Wilmington and moved the family there. He spent the next 20 years of his life in the Wilmington area working at several trades, including as a carpenter and as a boilermaker. “I then got several jobs at Wrightsville Beach,” he says. “I worked as a bartender and on fishing boats. Then I got a job at a singles apartment complex on the beach. We had many of the big beach bands of the day come play there. It was a lot of fun!”

It was in the late 1970s that Holland’s barber told him he had purchased some land up on a creek close to Holland’s hometown in the Holly Shelter Creek area. This got him to thinking about moving back up that way and starting his own business.

“I used to go up there and sit by the side of the road near the bait and tackle and count cars that would drive by in the morning and in the evening,” Holland says. “I wanted to see if there was enough traffic to support a store.”

In August of 1981 he decided he could make it work and leased the Holly Shelter Creek Gas Station/Bait and Tackle store. Thus began the long transformation of a small convenience store on a creek into a booming restaurant and campground that Holland renamed Holland’s Shelter Creek.

“At first, we just didn’t do enough business, so I decided to sell guns and hunting equipment,” Holland says. “Then we built on a little dining room that only seated 18 people.” It was then they started to get busy. “We served venison stew and breaded seafood. Even though the seafood was mostly bread and not that good, more and more folks started coming to eat with us.”

I ask him if he ever paid her back, and he says, “Many times over!”

Holland then began to clear the property next to the store to eventually become a campground. “We used the wood from clearing the property to heat the wood stove to cook our food,” he says.

To promote his business, Holland got creative. “We were a family restaurant. When the kids would clean their plates, we would bring them a free scoop of ice cream. The next time their parents took them out to eat, they would want to come eat with us!” They also started bringing free hushpuppies to the table when folks sat down — a tradition that still lives on today in many restaurants. Another genius marketing strategy came when Holland starting playing Santa at Christmas. The local children could sit on Santa’s knee when they went out to eat, tell him what they wanted for Christmas and even go on a hayride with free candy.

“Back then we didn’t have a way to get the word out about our business, so we had to find a way to bring people to us,” Holland says. “I would drive for hundreds of miles and put up flyers for the events we decided to start having.” 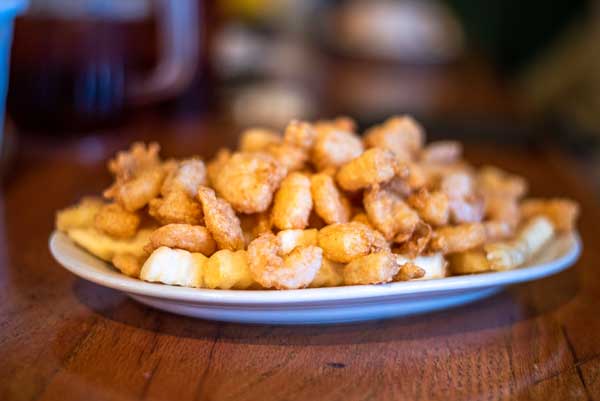 In 1982 they had their first fishing tournament there on Shelter Creek. A local business donated a deep cycle battery as the prize. “That first year, we only had 16 entrants,” Holland says. “And only one woman. The men said “You gotta have a women’s division,” but I didn’t pay any attention to them. And she ended up winning the tournament with the first and second largest fish!”

They continued the tournament for 15 years, promoting it as a family tournament. By the time they had their last tournament, they had 730 entrants on 429 boats with cash and prizes worth $30,000.

Then Holland began having Saturday Shindigs three or four times a year. His neighbor would let him borrow flatbed trucks, and he would have five or six bands to play on his adjacent campground. “We would have two to three thousand people come from all over the area,” Holland says. “We didn’t have much parking so there were cars parked one and a half miles in each direction!”

After his years of bringing locals and tourists into the county through hard work and promotion, everybody in Pender County knew Steve Holland. In 1994 he was voted in as a Pender County Commissioner and served in that role for 12 years. He put the same effort into that job as he did with the restaurant. “I returned every single phone call,” he says. “If I couldn’t get out in my truck to help figure out a problem, I made sure it was taken care of.”

For more than 30 years, Holland’s Shelter Creek Restaurant was open seven days a week from 6 am to 9 pm and served upwards of 3,000 people a week. They seated 186 indoors with a bar and deck out back. Often there was live music. Life was good on the creek. That is, until Mother Nature started taking her shots.

“There was 12 feet of water that covered the property,” Holland says. “It basically moved our business 10 inches off the foundation. We lost everything.”

Holland was devastated that everything he had worked so hard to build into a success was gone just like that. After working all day every day for so long and suddenly stopping, he said he became depressed and gained 40 pounds.

Two of his longtime customers, Mike and Annette Barnes, contacted him through a mutual friend. From Cary, North Carolina, they had been eating at Holland’s restaurant for years on their way back and forth to Topsail Island. It just so happens that in 2018 they had bought a big building, formerly a bar, across the street from his Tri County Electrical company on Highway 50. Mike remodeled the inside of the building, not sure of what business it might end up being.

Holland was hesitant about starting over again when Mike and Annette contacted him. As he thought it over, he decided to go to the county office to see if they were interested in him reopening the business close to Surf City. “I walked in there, and seven of the eight employees were former customers!” he says. “Two started crying and one said, ‘I miss my black cherry ice cream!’”

With some persuasion and persistence, Mike and Annette were able to talk Holland into opening Holland’s Shelter Creek Restaurant II in their newly renovated building. Opening on July 29, 2019, they had a three-hour wait for the first two weeks! Holland recalls seeing many of his old customers again and how heartwarming it was. 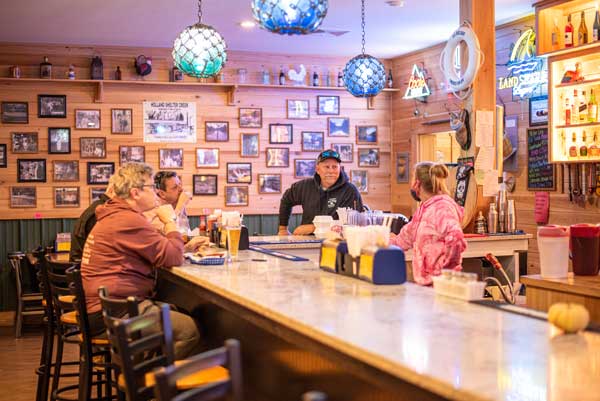 “I still have plenty of customers that were also eating with us 40 years ago,” he says. “And now their children and grandchildren are coming too.” He says it didn’t take him long to lose that 40 pounds after getting back to work again.

Their current menu specialties include frog legs, Cajun catfish (I ate it that day and it was the best!), shrimp Creole and catfish stew.

They still prepare food the old-fashioned way; steaks are fresh cut, burgers are hand-pattied, and all sides and banana pudding are homemade. They also have a very nice bar with eight local beers on tap. And don’t forget the 16 flavors of ice cream. And, of course, folks are welcome to sit out back on their deck and enjoy the wonderful Pender County weather year round.

When you stop in, be sure to say hello to Holland. He will take you on a tour and give you some history behind any of the many pictures of the old place, employees, friends and family. They also have several great pictures of the real king of rock and roll, along with mementos recovered from the flooded store. You will have a good time and get a flavor of some real, old-fashioned Southern hospitality. 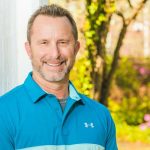